Day 10--Train to the Clouds

The alarm went off at 5.55am Saturday, but it was for a very good reason.  Today was our day to take the Train to the Clouds, a popular tourist train here in the Northwest of Argentina.  After an early breakfast (cafe con leche and medialunas, of course), we made it just around the corner to the train station to find our seats.  Fortunately, the people facing us got re-seated, and we ended up with 4 seats to ourselves, which made the trip so much better.

The train traverses an old line that links Salta to the Pacific coast of Chile, across the Andes Mountains, and is the 4th highest railway line in the world, but is primarily used only for freight these days, except the once-weekly tourist train which steams its way 217 km uphill from Salta, to the very highest point of the railway, the Polvorilla Viaduct, at about 14,000 feet.

The train is narrow metre gauge, as is standard throughout Argentina, and traverses many different landscapes as it climbs an astonishing 10,000 feet up the mountains, over the course of the 134 mile trek.  There was a strict budget for this rail line, so instead of using a cog railway or rack and pinion system that is found in the Alps, other more ingenious devices had to be planned.  The track includes two spirals, where the train track makes a loop while gaining height, and eventually crosses over itself via a bridge, where 40 or 50 meters of elevation can be gained in a very small space.  Here you can see our view over the spiral track we had just been on. 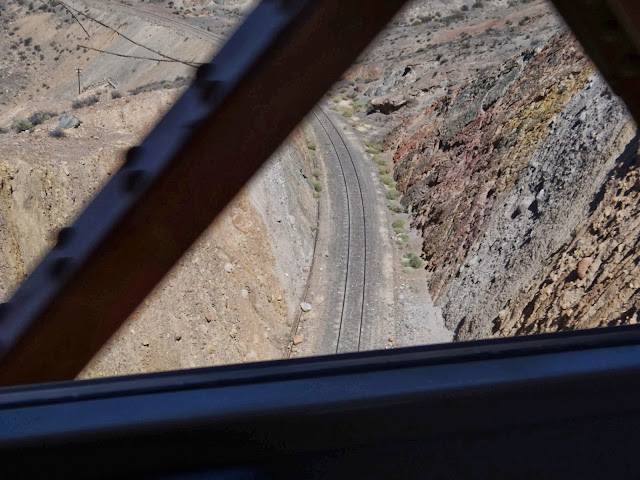 The most ingenious design, that is only in use on a few lines worldwide, is the Zig Zag.  The train pulls just past a station to the end of the line, and a switch is thrown, and the cars are reversed as they go up the hill on a separate short piece of track.  In this case, we backed into a half-tunnel (being a tunnel with only one entrance! Perhaps also known as a cave...) until the entire train was inside the mountain, whereupon another switch was thrown, and the train reversed course again to continue up the mountain, on its way.  It's a fascinating process, and quite interesting to look down the hillside and see two other almost parallel sets of tracks that you had just traveled on, along with many other tourists who come out on Saturdays to watch the train climb the mountain... 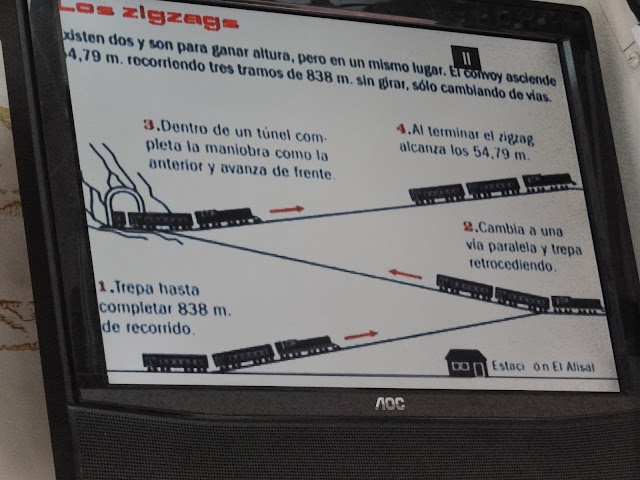 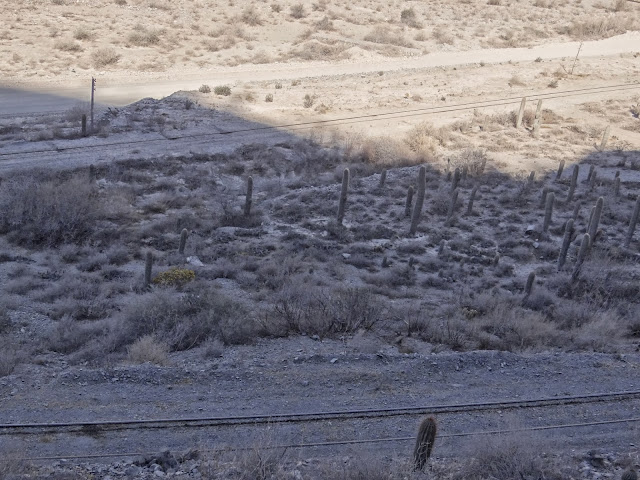 The train passes through some lovely vistas and past abandoned houses and train stations that haven't seen passengers in decades, and through towns that get smaller and smaller the higher we climb.  There are salt flats from old lakes long gone and many mines, only a few of which continue to extract commodities, mostly borax.

In addition to the 2 spirals and 2 zig-zags, we cross 29 bridges, enter and exit 21 tunnels and traverse 13 viaducts along the way.  Each car has an attendant who provides narration (mostly in Spanish) of the history of the train and the sights we see, and various mini-meals are served at various odd times, and oxygen tanks are available in each car, along with 2 nurses and a doctor on board, as well as 2 4x4 SUV Security Escorts and an Ambulance in case there are any mishaps.  The train and tracks are not used very much, so breakdowns do occur, and the high altitude can cause a bit of sickness, but not to worry, Coca is legal here, and so we had some Coca Tea, and also balled up some Coca leaves and put them between our cheek and gums, so that we could enjoy some of the benefits of the popular stimulant.  It contains only about 1/4 the alkaloids that street cocaine has, but is enough to be detected on a drug test.  While Cocaine remains illegal, the leaves are still legal in just a couple of countries nearby, and in Argentina, only here in the northwest, where it is heavily used by the indigenous peoples.  With our new drug habit, we both managed to escape most of the headaches and nausea that altitude sickness can bring, and we ended up a few thousand feet higher than either of us had been before. 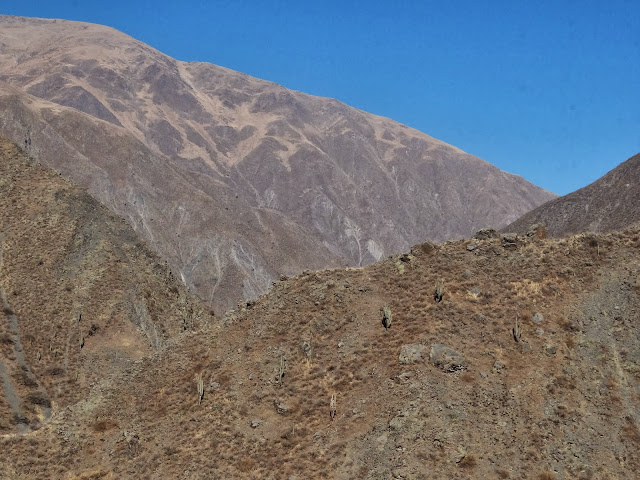 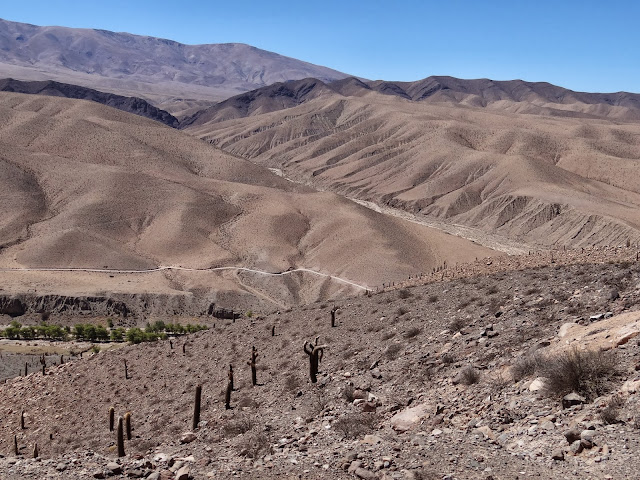 At the very top of the line, the Polvorilla Viaduct crosses a deep valley, and the train crosses it and returns so that you can get some good pictures of the area and the train on the viaduct.  It was chilly and windy at the top, where many indigenous people had set up an impromptu craft market, with human kids carrying goat kids around for petting and a couple of llamas were there for photographing.  I got off the train but a headache quickly ensued, and I returned to the train, but the locals were fine bringing goods by the windows for shopping.  The staff herded the tourists back on the train after 30 minutes and we headed down the line for about an hour, to the mining town of San Antonio de los Cobres.  The town and its inhabitants, at an altitude of 12,385 feet, live in one of the highest cities in Argentina, and make their living mining copper and other minerals, and creating woven goods from llama fibers. 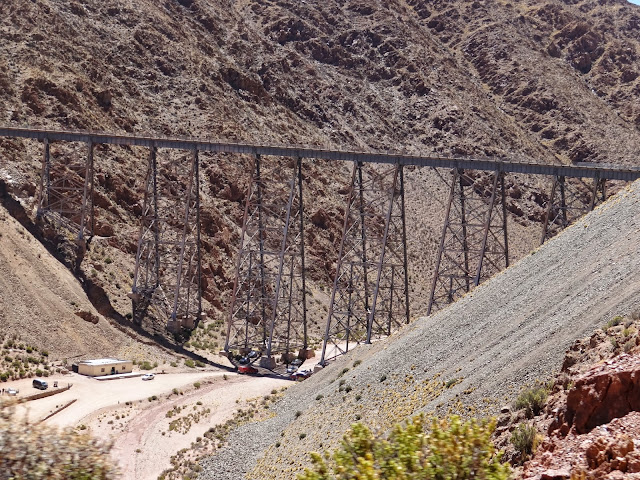 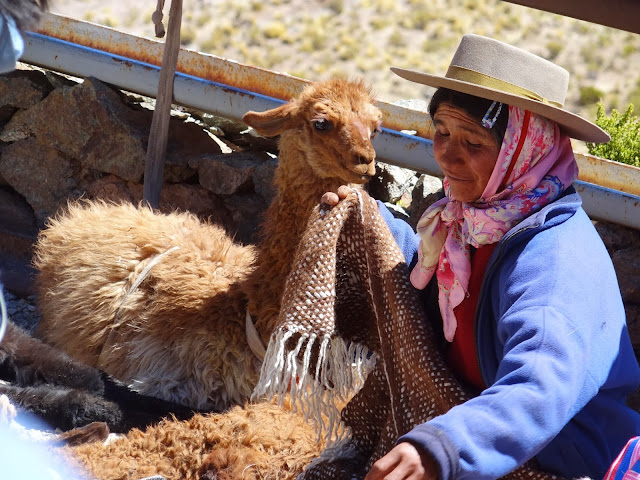 The trip up the mountain takes about 8 hours and we knew we didn't really need to return by train, so at San Antonio, we disembarked, and boarded a bus for a 4 hour return trip down the twisty-turny semi-paved road that roughly follows the same course as the railroad as seen below... 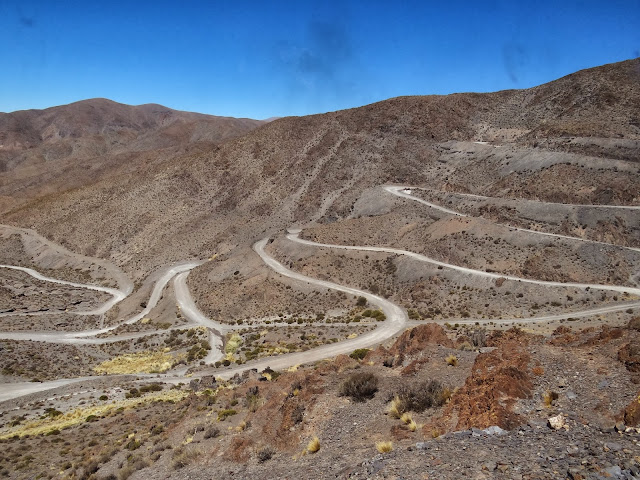 The bus was a double-decker bus with large, luxurious seats that recline nearly horizontal, and are quite popular for medium-distance transport across the country.  All the information was in Spanish, however, and we made a couple of random stops for reasons us English-speakers didn't really understand.  There was an "entertainment" system on board that played very random music from the 1980s, presumably by artists who are now dead and whose music is in the Public Domain, because we recognized very little of it.  The road was very nicely paved in spots, but then in other areas it was just white dust and we had to ford a few small rivers, all on a National Highway.  When the back of the bus hit a bridge just 30 minutes from the end of our journey, we were quite unsure what was going to happen.  Soon, we were parked on the side of the road at a Gomeria (tire shop) where Saturday Evening festivities were in full swing. Just enough of the workers had their faculties about them to fix the tire after an hour, but there was much confusion.  The woman in charge didn't speak English but said she could speak to me in French, so since my French is better than my Spanish, she told me what was going on, and a backup bus was coming if they couldn't fix it, but soon enough we were on our way back to Salta, only a little worse off for the journey.

The train trip was fantastic, marred slightly by the odd bus ride, but it was great to enjoy the scenery and learn more about this part of Argentina.

Despite our tiredness, we popped into a pizzeria for a large glass bottle of Coke (which still uses Coca leaves, although they have been decocanized) and some Pizza de Salta, which said it had corn and cheese and fried onions, but when it arrived we were greatly confused to find the pizza covered in a sort of creamed corn, with some cheese and just a bit of tomato sauce.  It was actually quite tasty, as the creamy corn mixture was fresh and edible and not at all from a can.  We confusingly ordered a half pizza, to find out they sell their pizza by the meter, so we ended up with a large slab of half a meter of pizza that we could only half eat.  Along with some more delicious baked Provolone cheese, the whole meal set us back US$16.

Off to bed, and no alarm whatsoever for our restful Sunday in Salta.
Newer Post Older Post Home