We had a very good deep sleep, courtesy of ear plugs, owing to the traffic that is everywhere all the time, and headed out to find a kiosk that would sell us credit on our phones, after successfully getting a SIM card with an Argentinian phone number, and then needed a quick breakfast.  To the chagrin of many of you, we settled on McDonald's, since we didn't want to linger over a leisurely breakfast, and it's always interesting to me to see how different a familiar place can be in a foreign land.

My friend had a tostado with cheese and possibly ham, which turned out to be the heel of two hamburger buns that had been toasted, and then sandwiched with some generic cheese and then some type of "ham", but it filled the need.  I opted for the hotcakes, which tasted just exactly as cardboardesque as the American version, except they were slathered in Dulce de Leche, which is basically awesome caramel sauce that I would gleefully eat off of cardboard anyway, so having hot spongy cardboard was the perfect delivery system for the delicious caramel.

Next was our first attempt at public transportation, the ubiquitous bus lines that criss-cross nearly every square inch of the city.  Only recently have the buses made the switch to an electronic card system, but because procuring one is a bit of a bureaucratic disaster for foreigners, we opted for the coin operated version.  You enter the bus, and tell the driver where you are going, and that you are paying with coins (no bills allowed) and then pay via a machine.  It went pretty well between my lack of Spanish and complete unfamiliarity with the coins, which are not very common.  The smallest paper money here (also available as a coin) is worth about 23 cents, so the coins are mostly useless.  Until very recently, coins were impossible to find, because the bus companies had a monopoly on all the coins in the city, because you were required to use them to pay your fare, and the buses are very popular.  The companies would then sell the coins en masse, at a markup, to the Chinese Grocery Mafia, so that everyone would be forced to frequent their grocery stores to get any change.  Even banks couldn't help you, but fortunately that monopoly has ended, and now only confused tourists have to navigate the bus coin system.

We were taking the bus to a money exchange store in the center of town so that we could retrieve the money that we sent ourselves from before we left the United States.  I am not an economic expert, so I can only partially explain this phenomenon, but basically everyone here loves US currency, primarily due to our fairly low inflation and relatively calm economy.  The economy here is growing, but inflation is nearly out of control, and so investing in US currency is a smart bet, and was a popular practice here.  But recently, it was made illegal to invest in dollars and a very strong secondary market (yes, black market) for US cash has emerged.  Known as the Blue Dollar, it is possible to exchange money for a lot better rate than you can do at the official rate.  If I were to go to an ATM and withdraw 1000 pesos, it would cost me about $170 (5.8 pesos to the dollar).  If I went to a shady cambio in a sketchy part of town, that 1000 pesos would cost me about $105 (9.5 pesos to the dollar) if I had the cash on me.  Enter Xoom, a company that somehow bridges the gap between sketchiness and thriftiness, where you can transfer money from a bank account (no risk of having your currency stolen) yet still get a great deal.  My 1000 pesos cost me just $117 (8.5 pesos to the dollar)...the system worked without a charm, so basically all of our out-of-pocket costs during the trip are about 1/3 cheaper than the price stated.  So, I'll use the Blue Dollar equivalent here, meaning you can add at least 33% to the price shown if you don't navigate the secondary market.

After getting all our business out of the way, we headed to the National Congress, and was amused to see an interlocking N - C logo adorning the base of the building... 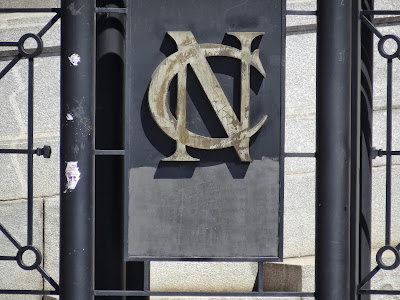 The building houses both chambers of Government and was built between 1896 and 1906, and the dome is based on the American Congress building, but as you can see it is a bit squished.  The building is the marker from which all distances in the country are measured, and is done is a Greco-Roman design of Italian origin, and Argentine construction. 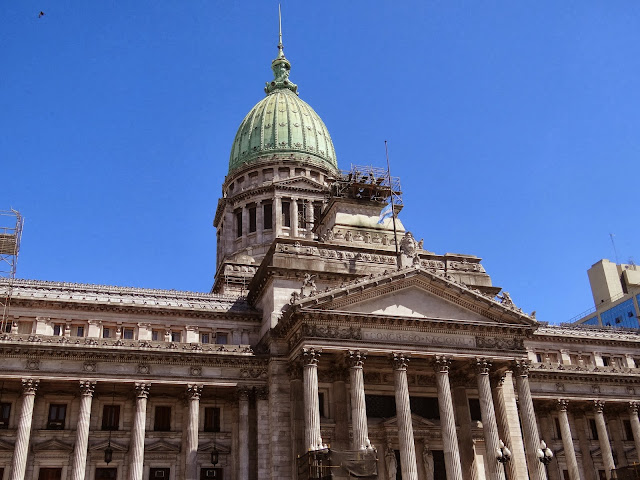 At the plaza in front of the building is one of the just couple dozen castings of Rodin's "The Thinker" found throughout the world.  Argentina is known as a country full of intellectual political discourse, so I think the juxtaposition of the sculpture and the law-making body is credible here in Buenos Aires, and am glad no has tried to pull this off in Washington. 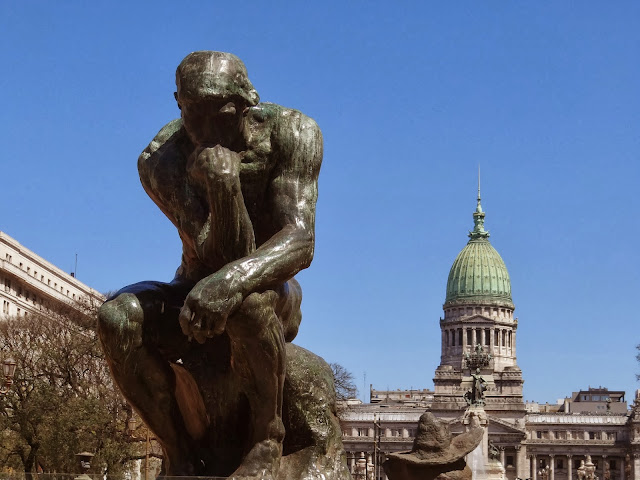 We continued our walk down Avenida de Mayo under a very blue sky, with temperatures in the mid-60s, and took our lunch break at Cafe Tortoni, one of the country's most venerated restaurants, and still extremely popular with tourists, politicos, and everyday people.  The restaurant has been on this site since 1880, and is often named as one of the most beautiful cafes in the world.  We enjoyed admiring the original well-maintained interior as we had a light lunch.  I chose the ham and cheese tart, an eggless version of a quiche, dense in its many layers of ham and cheese, while my friend had a uniquely Argentinian pizza, called a Fugazetta, which has a foccacia-like crust, and has lots of cheese and some very thin matchstick onions that are lightly cooked.  It was all delicious, and even with fancy drinks (and the standard 10% tip) the bill came to US$23 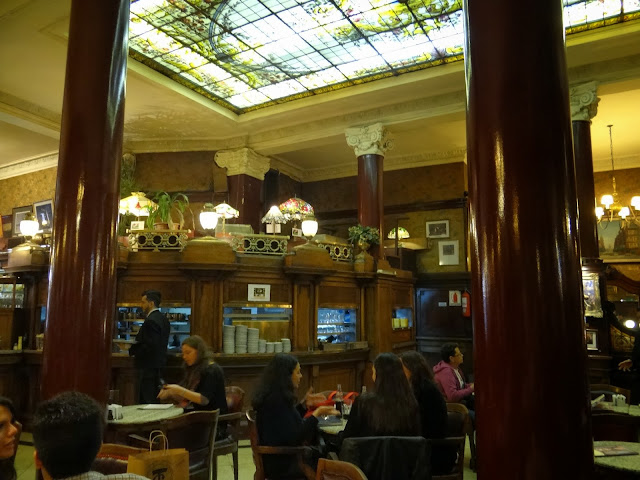 We continued our walk to the center of town and to the Casa Rosada (Pink House), which is the official office of the President, although she doesn't really spend much time here.  It is much more well known as having the balcony from which Eva Peron addressed her compatriots, shown below (and possibly familiar to you if you watched the 1996 movie starring Madonna, who successfully lobbied the Argentine government to film from the exact same balcony).  The site it is on has been the location of many important buildings ever since the city was founded in 1580, and has existed in its current form since the late 19th Century.

We tried our hand at the Metro system to return to the hotel after the tour, but even at 3pm on a Friday, we were packed in tight.  At US$0.29, the Metro is a total bargain, but we think we will splurge for the bus, which cost us a whopping US$0.41 for an 8km trip earlier today...busy, but a little bit more personal space.

After a well-earned siesta, we used Trip Advisor to help us find a local recommended Pasta restaurant, and the reviews of a restaurant just 3 blocks away were well warranted.  I had a delicious Sweet Potato and Almond Ravioli, in a 4 Cheese Sauce, and my friend had Canneloni, stuffed with Chicken and Zucchini in a tasty sauce, not otherwise specified.  With half a bottle of wine and water, and including the US$1.30 per person "fork, knife and bread rental fee" (well, you get to keep the bread) our dinner was US$26.

Time for bed, for an early wake up call for our day trip across the river to Uruguay!