For our last full day in Buenos Aires, we decided to have two good meals surrounded by seeing some of the design shops that Buenos Aires is known for, as well as a visit to the Botanical Gardens.  The forecast was for cool and rainy weather, but only the cool part came true, as we didn't have a drop of rain, though clouds were threatening for much of the day.

We started with a brisk walk around the corner to one of Buenos Aires' most well-liked bakeries, Malvon.  We opted for their special Malvon breakfast for two, which came with a selection of their baked goods and as always, two beverages each.  Along with the obligatory Cafe con Leche, we had a choice of Lemonade or Flavored Water of the Day, which today was Kiwi plus either Banana or Pineapple (the words rhyme in Spanish and are only a letter apart, so blame my poor comprehension skills on this one).

We selected Pecan Pie as our sweet item, and it was nothing like an American Pecan Pie...it was not very sweet at all, but was made with a bit of honey, and had disks of semi-sweet chocolate scattered throughout.  The tableau also contained two slices of a light rye bread, two slices of a very tasty pumpernickel bread, served with cream cheese and a red marmelade that tasted familiar.  We decided it must have been a blend of frutis, but were assured that it was simply strawberry.  We also had a savory scone (Parmesan and Almond) and a sweet scone (Orange Poppyseed), as well as a Croque-Monsieur, the Parisian standard Ham and Cheese and More Cheese sandwich.  The restaurant was very charming and the coffee was great, especially given the chilly morning.  The extravagant buffet was US$19. 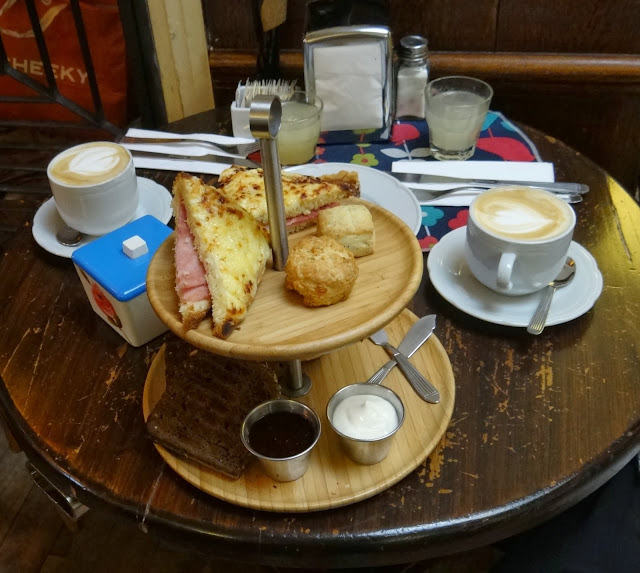 I was finally able to procure an electronic "debit card" for use on the otherwise complicated bus system; even though the coins aren't controlled by the Chinese Grocery syndicate any more, the city's residents still hoard them and they are nearly impossible to procure.  Of course, where you get the card isn't the same place where you can add money, so we successfully loaded the card this morning, and were able to then get rides on the buses for the discount price of US$0.19 so off we went to the Botanical Gardens, hoping to get a visit in before the rain started.

The Botanical Gardens were pleasant to wander around, and had hundreds of species of trees from around the world, but focused on the Southern Hemisphere, so there were plenty of trees that were quite unfamiliar, although my friend recognized quite a few that she had seen when she came to visit me in South Africa last year.  A few flowers were in bloom here in the second week of Spring, but the persistently cool temperatures have probably delayed many of the blooms from appearing. 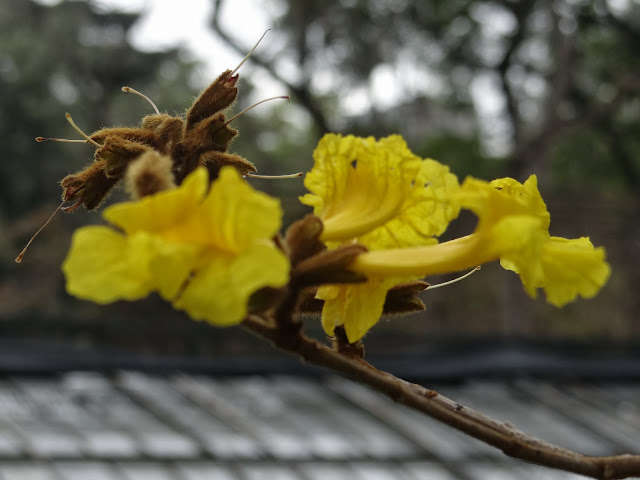 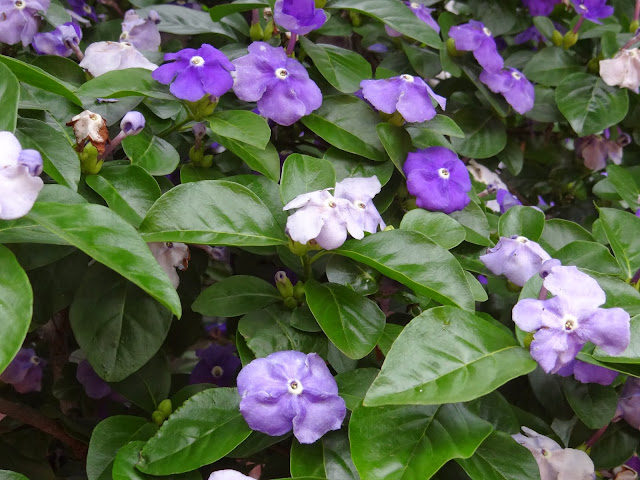 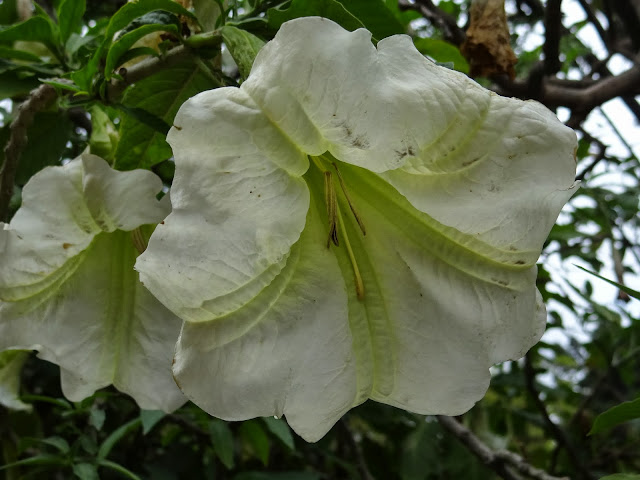 The gardens are also home to many, many cats, all of whom are well-fed by a group of volunteers who show up with bits and/or kibbles and the cats are mostly friendly and we enjoyed watching a couple stalk birds or perhaps each other.  For the most part, the cats left the wandering hordes of schoolchildren alone to their "art projects"... 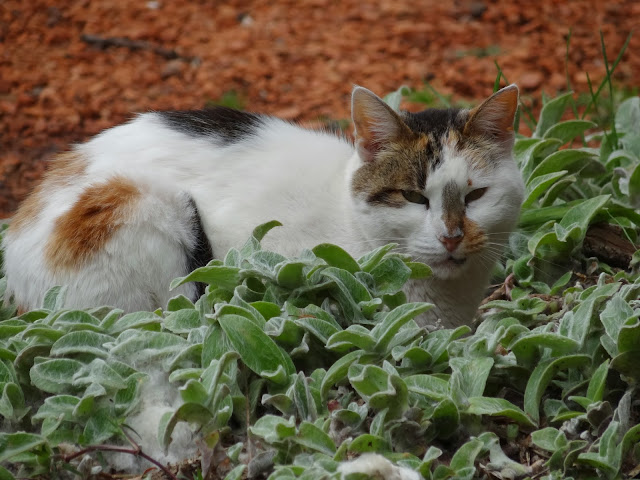 We then boarded another bus, bound for the chic Palermo Hollywood neighborhood to visit a couple of Buenos Aires' Design shops.  Because of the unrelenting high inflation here, Argentina took a bold step to look inward at their imports and exports and decided that if everything else in the world was only going to get more and more expensive, that it was time to be more insular in their manufacturing and thus was born a strong attempt to produce more goods for their own consumption.  We haven't seen anything except Argentinean wine and even the American brand goods we do see are all stamped as Made in Argentina.

Over the past few years, Argentinean architects and designers have caught the eye of aficionados around the world, so we tracked down two stores with Argentinian designs.  Unfortunately, store #1 was no more, with no trace of its current location.  In its place was a cozy antique store that had some unique art, but wasn't what I was looking for, but we did hike our way a dozen or so more blocks to store #2, which showcased some fantastic leather products (from the Argentinian cows, of course) as well as pillows, chairs, handbags, and other interesting home designs.  Along the way we passed a few other shops with an assortment of kitschy and clever home design elements for the office, kitchen or bedroom, and most everything was labeled as Argentinian in origin.

Amongst all the walking, we did take a break at a local cafe, where we both had a Submarino.  While that is the Spanish word for submarine, here it is not a food, but rather a beverage.  When you order a Submarino, a tall glass arrives full of piping hot steamed milk, with a layer of froth on top, accompanied by a napkin concealing a bar of chocolate.  You then launch your bar of chocolate into the murkiness and stir briskly, as desired.  Eventually you end up with a tasty mug of something that is a lot better than Swiss Miss powder caked at the bottom of a mug of tepid water.  Why we put up with inferior hot chocolate in the USA is a total mystery to me.

We still had a bit of time left in the day, and headed back to the hotel, which is located adjacent to a number of factory outlets.  Most of the stores aren't names we were familiar with, but we did some window shopping and tooled about before we took a break to rest from the day's endless walking before dinner.

We would have taken buses to get us close to our dinner spot, but in less than 12 hours I managed to finally both activate and subsequently lose a Bus Card.  Quite aggravating, but since our taxi ride to the restaurant 15 blocks away was all of US$2.35 (including tip), I was able to get over losing the card.

We decided to splurge on a proper non-buffet steak dinner, with all the accoutrements, along with some 2-for-1 capirinhas (the Brazilian national drink that is quite potent) and rang up our most expensive meal of the trip so far, at US$59, which included two appetizers, two steaks, two sides and ahem, 4 cocktails.  The only new item of the evening (other than some atrocious Gratinated Broccoli ordered by my friend [see upper left of picture below]) was Provoleta, which is basically a thick slab of Provolone cheese that is basted with olive oil and sprinkled with a bit of oregano, red pepper flakes and then grilled in a Cast Iron skillet until bubbly and insanely delicious.  This shall indeed be replicated stateside as soon as possible... 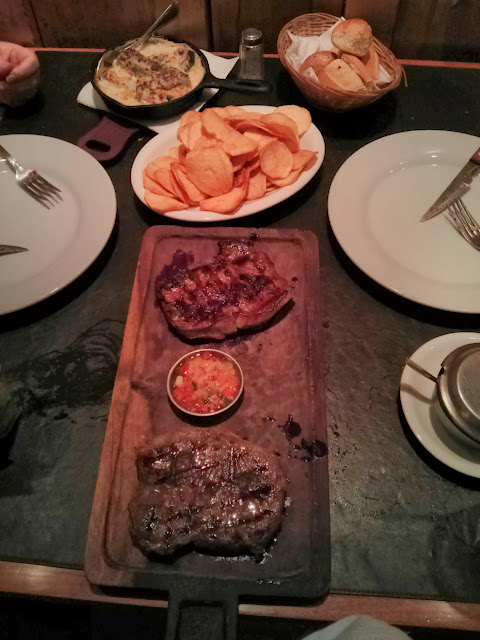 Tomorrow we fly to the northeasternmost point of the country, to Puerto Iguazu, home to one of the Seven New Wonders of the World, Iguazu Falls.  No free Wi-Fi at our next hotel, so I'll get blog postings up as I am able.
Newer Post Older Post Home