Our first early day of the trip, with a 6.15am wake up call so we could catch a taxi to the waterfront, where we waited in many lines before boarding the Buquebus, a high-speed catamaran, which would take us across the 50km wide river between Buenos Aires and the colonial city of Colonia del Sacramento, in Uruguay.

After an uneventful boat ride, we arrived in the charming town of Colonia, which is a popular tourist destination as you can easily reset your Argentinian visa if you are here longer than 3 months, and even procure American Dollars in the ATM machines.  After a quick introductory multimedia presentation at the tourist office, we walked to the tiny Artisan market, where we saw a vast array of products, mostly made possibly in Uruguay, but also probably in China.  The city was founded as a Portuguese outpost in 1680 and until Uruguay was created in 1828, the city changed hands 10 times between the Portuguese and the Spanish.  The streets are lined with well-pruned Sycamores to provide shade during the summers. 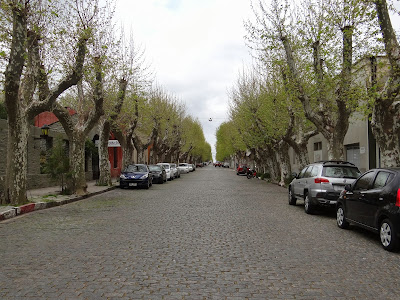 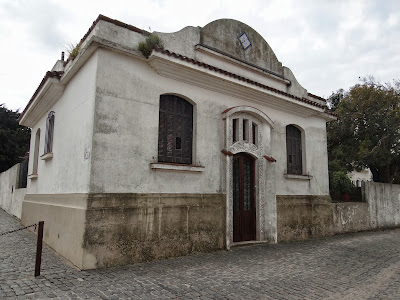 My guidebook recommended a small restaurant on the oldest street in town, called Buen Suspiro, which translates to "Good Sigh" as in the sound one makes when eating delicious food, and we emitted many, many Buen Suspiros while eating in probably the most charming restaurant I've ever been to. 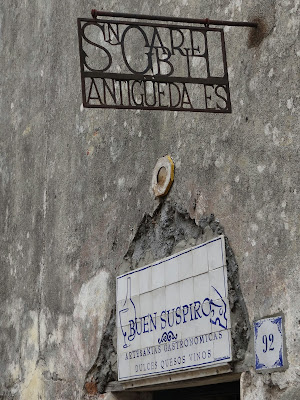 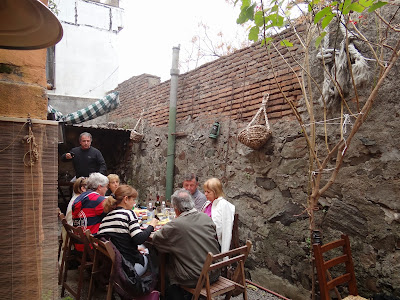 The restaurant serves primarily products from Uruguay, and specializes in picadas, which is basically mini-tapas, plates of cheeses and meats and tarts eaten with toothpicks.  We decided to start with an Uruguayan Onion Soup, which was redolent with cooked onions, leeks, cream, cheese, wine and a bit of pepper, turned into a cross between French Onion Soup and an Onion Chowder.  As we were sitting in a courtyard under a mix of clouds and sun on a day in the low 60s, the soup was the perfect starter.  As a fan of sparkling wine, I was interested in trying a uniquely Uruguayan concoction, called Medio y Medio ("Half and Half").  It's basically half white wine and half sparkling wine.  I calculated the price on the menu to be about US$7 so ordered for us, and was pleasantly surprised to see that for US$7, we got an entire bottle of the delicious wine, complete with the server nearly putting out someone's eye when the cork popped a bit early during decanting. 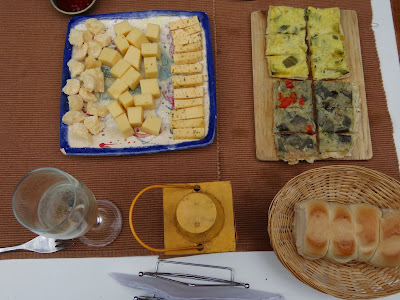 Finally, the main course arrived:  a plate of 3 different cubed cheeses, a wooden slab with fresh-from-the-oven vegetable tarts, a small bowl of a dipping sauce, and a basket of fresh crusty rolls.  With the help of the website and Google, a bit about the particular foods:
Cheese Course--
--Queso Colonia; this was a semi-soft cheese that tasted liked colby, swiss and cheddar, with tiny holes but a soft texture, and came in cubes.  It's made in the "New Switzerland" colony that was once inhabited by Swiss immigrants, who evidently brought their cheese-making skills with them.  In a country of 3 million persos, there are 12 million cows, so something needs to be done with all that milk...
--Queso Colonia Saborizado, which is basically the same cheese, filled with oregano.  Sliced into extra thin juliennes, this cheese was slightly creamier, and paired so well with the earthy oregano, and was probably our favorite.
--Queso tipo Paremsano; not actually being in Italy, this was called Paremsan-type cheese, and had been scooped out into small pieces the size of half a marble; the flavor profile was a bit milder than Parmesan Reggiano, but had the same texture.  As an eating cheese, it really worked, especially in the tiny bite-size portions.

The Dipping Sauce was a sweet and sour sauce based on red peppers, which you could taste in every drop, along with a bit of eggplant.  It worked really well with the cheeses and even on the tarts.

Tarts--
--Eggplant sauteed with a little bit of pepper, and layered on a buttery, flaky crust with just a bit of egg to hold it all together in a rectangle and sliced into 6 smaller rectangles.  The other tart was zucchini and red pepper prepared the same way.

I think we may have abandoned 3 or 4 semi-marbles of Parmesan, but otherwise, since we had so much wine to drink, we just slowly worked our way through the cheeses and tarts while the sun made a bit of progress against the clouds.  The dollar is not quite so strong here in Uruguay, but the total meal still topped out at just US$35 total. 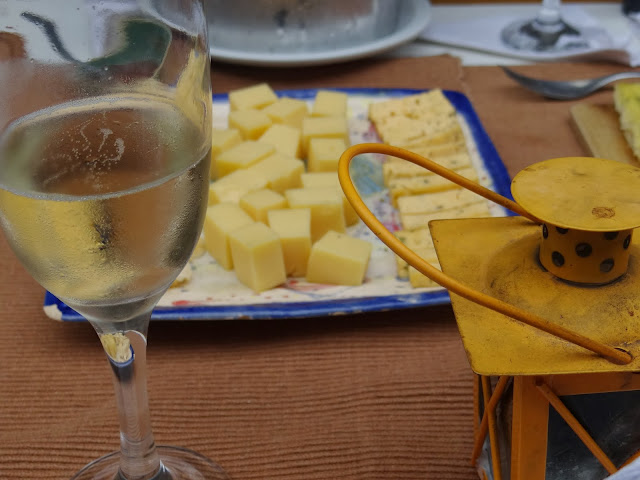 Eventually, we were able to regain our balance and made our way across town to try our hand at the slot machines at the casino.  Our boat didn't leave until 8.30pm and by 3pm we had seen what there was to see.  We finished losing just a few dollars in the casino, and tried in vain to pass by the Ice Cream without stopping, but failed, and enjoyed Dulce de Leche and Mentha Granizado (mint chocolate chip) before heading back to the boat terminal.

It was a long day, but we greatly enjoyed our excursion to Uruguay, and the 4 extra stamps our passport received.  We made it back to the hotel about 11pm, about the time Portenos (those from Buenos Aires) eat dinner on the weekend, and found a chain pizza parlour a few blocks down that provided a small dinner of a slice of pizza and an Empanada with corn and cheese each, plus 2 glass bottles of coke (as most soft drinks here are served) for the princely sum of US$9.

Then it was off to bed before an easy relaxing Sunday...