Back to yesterday before I get too far behind...

We had a private 5 hour tour of the city with fantastic weather...just a few clouds in the sky and temperatures in the low 60s, which made for a perfect day of touring.  We drove by most of the famous sights of the city, and when parking magically became available, we got out of the car, and ventured closer to some of the most interesting places.

Recoleta Cemetery was the most unique place we visited, home of the final resting place of Eva Peron, more commonly known as Evita.  The entire cemetery was a mini-city, full of family-owned crypts, each more opulent and impressive than the last.  The primary goals of the living members of the family was to show off their wealth to their dead neighbors, and some of the buildings looked like they could have been fancy shop entrances for chic boutiques.  It seems that ownership of the crypt goes 25 feet down, so your most recently departed earn a top shelf space for their coffins, totally visible from the outside.  Then, once someone else dies, you get kicked down to the cellar, to be stacked (literally) on the older dead people, etc etc until one of your far-removed descendants fails to pay the bills, and you get evicted.  We saw eviction and for sale signs on many of the crypts, while others were being polished and cleaned while we walked by.  Many of the older crypts that must have pre-paid their stay were in bad shape, and you could peer in and see dozens of coffins stacked up, trying to remain intact against the elements.  If you're in the market, the crypt next to Eva Peron is on sale for just US$400,000, annual fees not included. 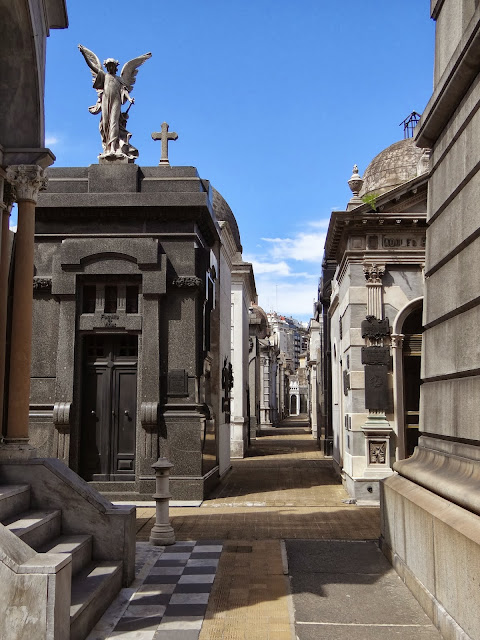 We finally made it to the hotel in the late afternoon for a bit of a rest, before venturing out to find food and a SIM card for our phones, so that we could have some internet access from wherever we were.  My Spanish is barely passable...they seem to understand me for the most part, but I rarely have a clue what they are saying when they respond, so Google Translate is a godsend, particularly when trying to eat, making sure to avoid tripe or other items we might not really be interested in.

For dinner, we found a simple restaurant that advertised a nightly special.  We had a beverage, an entree and dessert or coffee for about US$9 and we opted for Pepsi (in a bottle), and Chicken Milanesas, which is basically a large piece of country-fried Chicken with a creamy yellow sauce that was like a very mild curry, with a side of crispy fried slices of potato, and a tiny cup of strong decaf coffee to top it all off.  The price for the meal was excellent, but that is mostly because of a unique currency situation that I will explain in another post that separates an affordable vacation from a bargain vacation.

After about 38 hours without sleep, it was definitely time for an early retirement to bed at our quaint hotel.  Ciao!