Over last weekend's Heritage Day holiday, my friend and I drove across the province of Mpumalanga to the tiny landlocked Kingdom of Swaziland.  The first half of Mpumalanga has a similar terrain to Gauteng, where I live, but soon the rolling hills begin to swell as you continue west, eventually crossing through the Drakensberg Mountains.  And with the mountains came fog.  At first it was just wisps, then clouds, but soon we had trouble seeing oncoming cars, or worse, pedestrians crossing the highway.  Soon, we had our hazard lights on, as we were limited to seeing only about 1 car length in front of us in the thickest fog I have ever encountered.  It seemed even more dangerous to pull over, as other cars continued their crazy driving, passing us in the fog, or not having working taillights, etc.  After half an hour, the fog began to subside as we descended toward the border with Swaziland.

Crossing a land border here is not quite as simple as it is from the US, where you can stay in the comfort of your car.  First, you park on the South African side and go in to an aging frontier building where you get your passport stamped to show that you are exiting the country, and get a border pass.  You then drive to the actual exit side of the border and hand them the pass, whereupon they open the gate for you to leave.  After a few meters of driving, you pull over again, and enter the Swaziland border crossing building, and get your passport stamped to show your entrance to the country.  Then you proceed to a customs station, showing them the letter from your rental car company proving you are allowed to have the car outside of South Africa, and then proceed to the revenue office to pay your road tax (about US$6).  It all reverses on the way out of the country, complete with a car inspection to make sure you aren't smuggling something you shouldn't be smuggling.

Swaziland is an absolute monarchy, with a King who inherits his position, and is the head of state.  Unlike Queen Elizabeth, who is bound by a constitution, 44-year old King Mswati III has ultimate control of the country, and while he seems to be admired by most of his subjects, he has banned all political parties (sounds attractive at times) and there is quite a bit of criticism of his lavish spending, but since he has 14 wives and 23 children, he does have a lot of people to support.  In an odd twist, his first two wives are appointed; he got to select the other dozen himself, but he cannot technically marry them until they are pregnant, to prove they have the ability to procreate.

The country has just over 1 million people in a somewhat round country that is just slightly bigger than Connecticut, and has been affected by HIV even more severely than its big neighbor, South Africa.  South Africa is by far its biggest trading partner, and while there were some differences, the country didn't feel dramatically different than just being in a more mountainous part of South Africa.

We traveled almost to the middle of the country in just over an hour, even with a bit of lingering fog.  Our hotel was located in a botanical garden and was very nicely manicured and lush, with quite a few flowers starting to bloom. 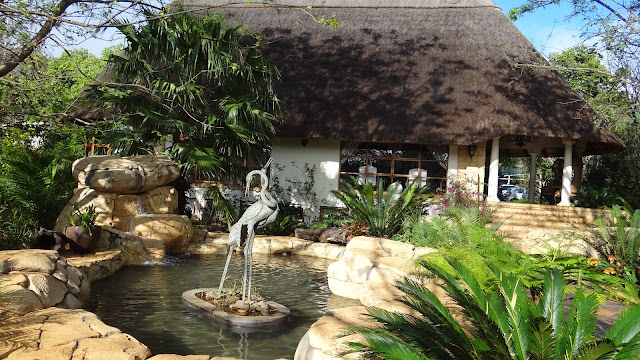 We went to dinner at the restaurant on the other side of the property, and when we returned, were surprised to see hundreds of ants congregating inside our room on the walls and carpet near the door.  They may have been attracted by the overwhelming artificial rose scent from the plug-in air freshener.  As the ants appeared to be mobilizing, we decided to call the front desk, and upon further review, they decided to move us to another room.

The new room looked identical and we were soon settled in; a quick trip to the bathroom revealed quite a few smallish spiders that quickly scurried away, but while in the bathroom, a leaf magically appeared on the carpet that unfortunately turned out to be a scorpion of the not small variety.  After a startled yelp, I went to investigate and froze in place while I decided on the best course of de-scorpionizing the room.  After my failed attempt at corralling a cane rat in a small room in my house, I was skeptical that the nearby trash can could contain the critter, but I decided there was no way it could upend a metal trash can, and fortunately it had a flat lip, and soon the scorpion was hidden out of sight, but not out of mind.

After a not great night of sleep, we cautiously dismounted the beds and checked our surroundings for the friends and family of the imprisoned scorpion, and after a quick movement from the corner of the room revealed (just) a lizard, we quickly packed up un-showered and headed to breakfast.

Outside, we did get to see some more pleasant animal life in the form of delightful songbirds as well as some majestic peacocks lounging on various verandas. 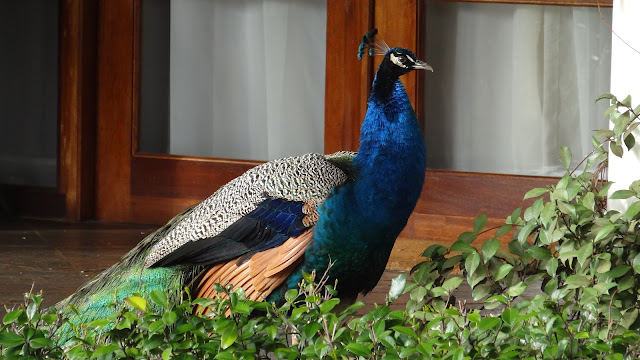 The gardens were beginning to show signs of Spring, but it was time to explore a bit of the country as we made our way back to South Africa. 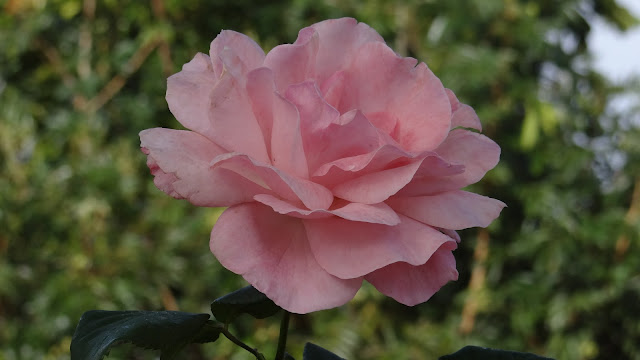 While much of Africa is known for traditional handicrafts, they are especially popular in Swaziland.  In addition to a long history of tribal crafts, foreign missions have also helped to reinvigorate different sectors in handmade crafts over the past 30+ years, encouraging a new market for tourism and providing much-needed jobs.

One of the most famous of these endeavors is the Ngwenya Glass Factory, where you can find a large variety of glassware, vases, and the very popular glass figurines of Africa's beloved animals.  All of the glass products are made from recycled glass, collected by people from all over the country and melted down to find a new, environmentally-friendly home in visitors' houses around the world.

We also visited shops selling dynamically colored candles of various sizes and patterns, hand-woven baskets, and glycerin soaps featuring scents from a variety of African plants and herbs.  One of the shops had a small book detailing all the flora and fauna to be found in the Kingdom, and I was slightly dismayed to see that Swaziland is home to not one, and not two, but three species of scorpions.  The hotel staff we encountered all claimed to have never seen such a creature, but the book proved it was not too surprising.

We drove through the capital, Mbabane, to try to find the American Embassy out of curiosity, but found only 1 of the 5 embassies in the country, the Taiwanese Embassy.  We had seen a couple other Asian-influenced official-looking buildings and the connection is a bit confusing.  It appears Swaziland has been a proponent of Taiwan for decades, and Taiwan has brought foreign development and aid to the Swazi people in exchange for support on the international stage (by a King, no less).  Only a handful of countries recognize Taiwan as the "real" China, so there are very few actual Taiwanese Embassies, but Swaziland has one of them.

After our quick informal tour of the capital, we were glad to have spectacular sunshine and enjoyed seeing more of the landscape on our fog-free trip back to Pretoria.
Newer Post Older Post Home