Swakopmund is a town on the coast of Namibia, with about 42,000 people, and is situated at the mouth of the Swakop river.  The Swakop river crosses hundreds of miles in Namibia, but rarely has much water in it, and what water it might have in it is not exactly pleasant.  Ever since people lived near the river and noticed it, the river's contents was often very muddy, owing to the desert that it washed through after rare rain events, washing away dirt and debris, animal carcasses, and other ill things.

The early settlers noticed that the river reminded them of something, and so the locals named the river "excrement opening" in their native language.  The German's modified it only slightly, and so this charming town is named for a rather un-charming feature.

The city is known as a resort town, but not in the same sense we are familiar.  The cold Benguela Current offshore here keeps the ocean quite chilly year-round, and really never suitable for swimming.  Even though the town is technically in the tropics, it has one of the world's more unusual climates, called marine desert, characterized by rather cool temperatures, extremely low precipitation, but lots of fog and humidity.

Swakopmund's average high temperature is in the 60s year round, although they do have occasional periods of warmer temperatures, and the average low temperature is in the 50s every month of the year, but it might dip into the 40s now and then.  Last year, they had almost 4 inches of rain, half of it occurring in one day.  This was well above their average of half an inch of rain a year.

But, plants and humans are quite adaptable, and what little natural flora is in the area has learned to make do, mostly getting its moisture from the morning fog that shows up on about half of all days of the year, supplanted by occasional mist or even sprinkles.

It feels as if someone took a modern German town, picked it up, stretched it out like Silly Putty, and plopped it down in the middle of a desert.  Next to an ocean.  In Africa.  I heard German being spoken everywhere and there were plenty of German restaurants and hotels.  The center of town has plenty of interesting German-ish architecture, as you can see in these photos. 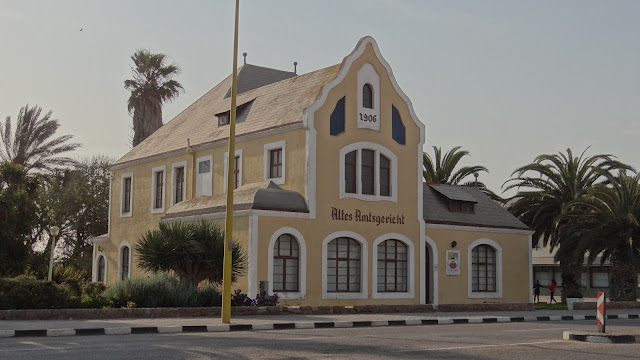 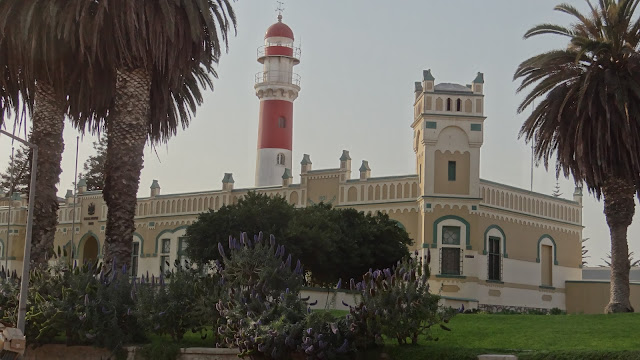 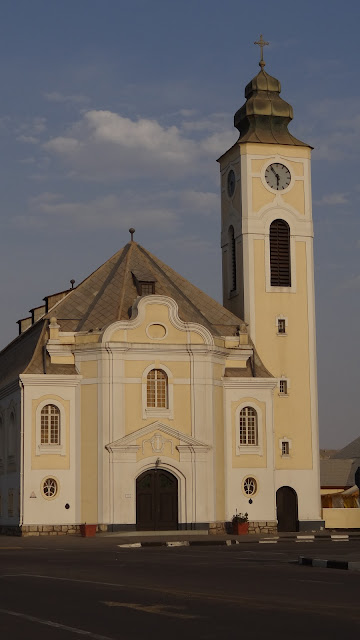 I have no clue the exact species of tree that this is, but there were quite a few in the town.  Perhaps the lack of rain prevents the branches from all developing, but they reminded me very much of a Pennsylvania Dutch Fraktur, a type of folk art I remember seeing driving through that part of the US. 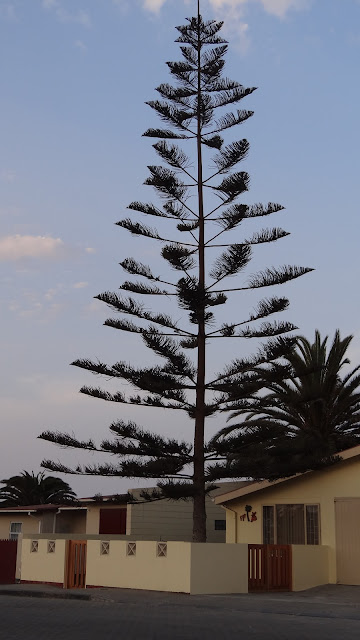 Watching the sunset over the Atlantic Ocean was a bit surreal, as if I was upside down on the planet somehow; a similar confusion happens when I'm on the west coast of the US, and the ocean is on the wrong side, according to my built-in GPS. 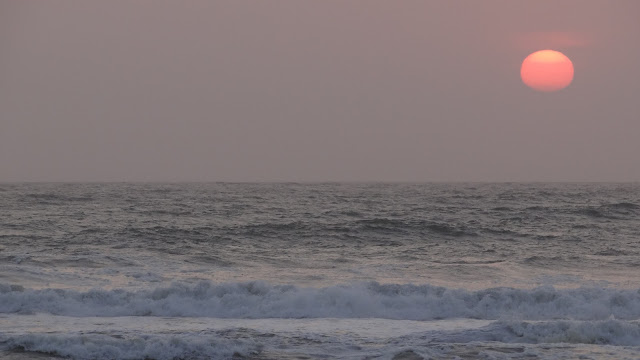 On Sunday, I drove down the coast to a British settlement, Walvis Bay, and took a 3 hour boat excursion out into the deepwater harbor, the only natural harbor the country has, making it quite busy.

Our destination was the seal colonies and to see two different species of dolphins.  The owners of this tour company had helped to rescue a seal trapped in a fishing net over a period of months, gently coaxing the seal to get comfortable with them, and then slowly cutting out portions of the net that had grown into the seal's skin.  Over time, the seal developed a trust with the crew, and so did a couple of his pals, and now these 6 seals know the boats, and they know there are snacks on board for them, so they just climb on board whenever they feel like it.  They seem to like the attention, and even don't mind being petted briefly, as long as they get another fish.  You can also tell he sort of enjoyed having his picture taken.

Once they are on the boat, they don't get too bored easily, checking out the passengers, and even nudging them a bit if they appear to even just possibly possess some fish.  Usually, the skipper has to throw a fish out into the water, and then gun the engine to get away.  This sometimes can take a couple of tries, because the seals are *very* fast, and often can get back to the boat before we've left the area.

The bay is also home to much birdlife, including cormorants, terns, gulls, pelicans and flamingos.  Pelicans here, in particular, live much longer than similar species in the US, the theory being that the water here teems with minerals from the rich Benguela Current, which means more fish, which means the pelicans don't have to expend as much energy looking for their next meal.  They routinely live to be 40 years or older, compared to their American cousins that might get to 16 or so years old. 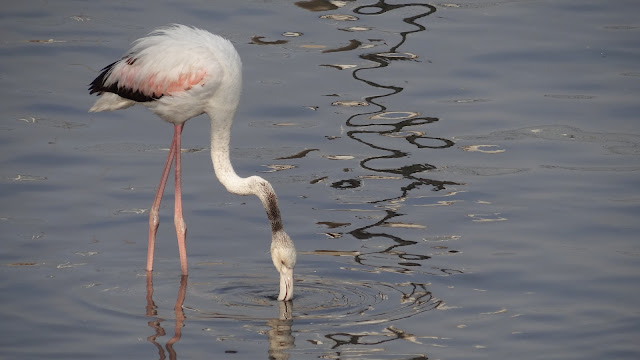 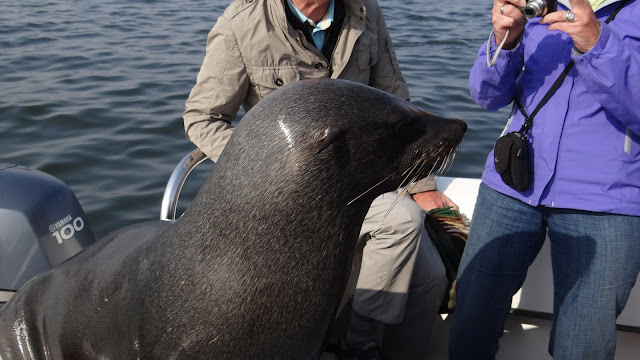 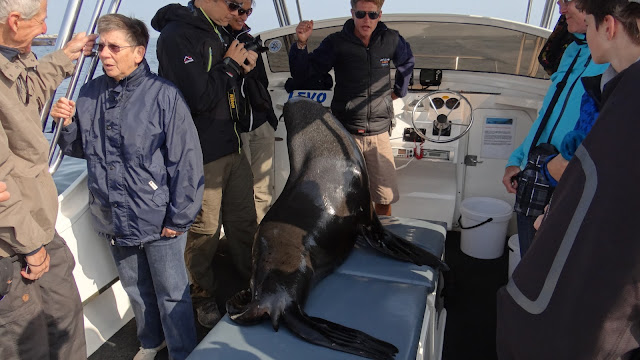 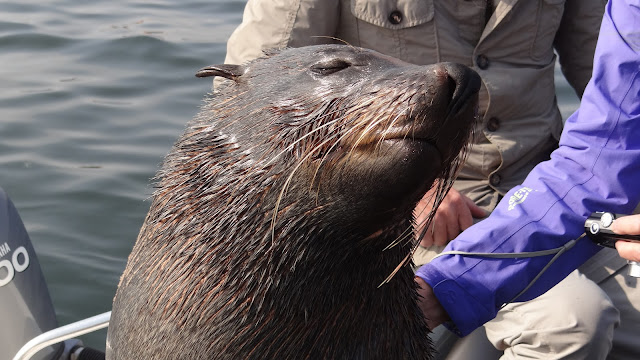 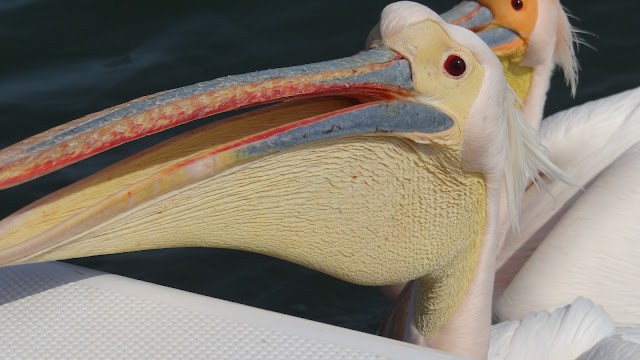 Because of some odd rules, fishing boats in the region get allotments based on their original fleet.  If a boat becomes disabled or unusable, the companies do whatever they can to make sure the boat stays afloat.  If it sinks, their fishing allocation sinks with it, and they have to try to obtain a new license.  So, the harbor is full of "ghost ships" just waiting for the day when the rust takes over and the boat finally just disintegrates.  This old boat is now home to a menacing gulp of cormorants. 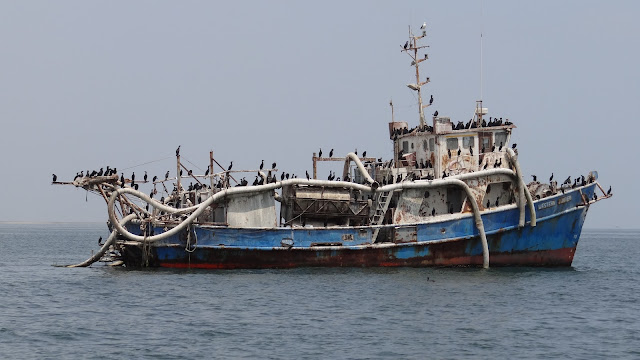 We also motored by the Cape Fur Seal colonies, full of thousands of Seals, sunbathing, feeding or just frolicking.  The seal population in Namibia now exceeds the human population in the country, and there is a culling program; unfortunately, the seals eat a tremendous quantity of the fish in the area, which is having an adverse effect on the ecosystem, and so they are trying to reduce the numbers.  Walvis Bay alone is home to tens of thousands of the charming, if not a bit smelly, animals. 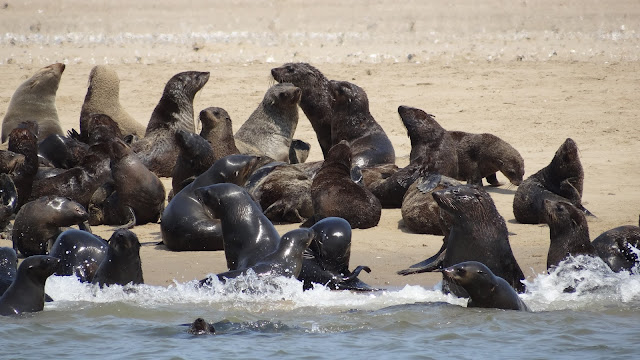 We did manage to see both Bottlenose Dolphins, and Heaviside Dolphins, but they moved too fast for me to get any pictures.  I got a couple snippets of video, but my videos are so large that I won't be able to get them loaded until after I get home to the States, where I have a bit of bandwidth.

After the boat tour, I drove a bit out into the desert, where Dune 7 is located, about 7 kilometers from town, hence its name.  It's one of the larger dunes in the Namib Desert, and even trying to get some smaller objects in the picture for scale, it's impossible to tell that the dune is over 425 feet tall.  You can drive right up to it, and if you are in a crappy Kia Picanto, you can very easily get stuck in the sand, and be thankful that some Italian tourists know how to get a tiny car with 2 horsepower and a stickshift out of the middle of the road, where no other cars appeared to have issues.

You can walk up the dune, if so inclined, or "snowboard" down it, or ride quad bikes, or you can hydroball down the dune.  No, I had no idea what hydroballing was, but it's basically a giant hamster ball, filled with a slosh of water to keep you "afloat", and then they just push you over the ridge, and off you go, rolling your way down the smooth dune face.  Click here to see a picture, or click here to see a video.

After seeing the video, it seems possibly fun, but with my luck, I would have rolled into the Ocean, skimming across the surface until I crashed into one of the Ghost Ships, so I settled for the "car-stuck-in-the-sand" for my desert adventure.  It would have been more of an adventure had I not gotten the car stuck in a different batch of sand the day before. 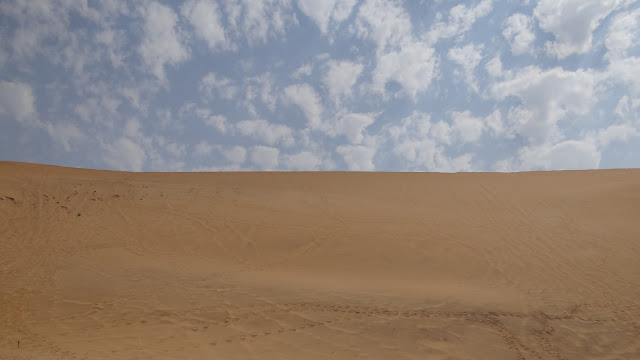 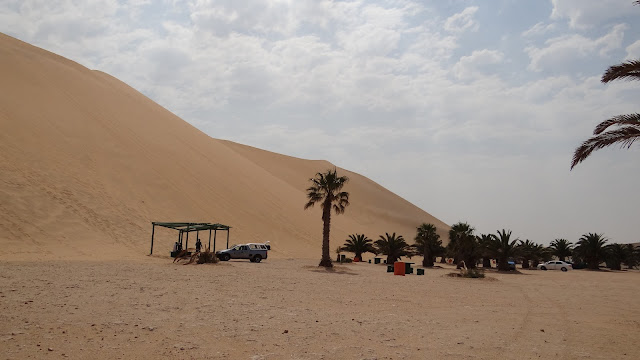