Over Columbus Day weekend, I went to Namibia to check out a very different side of Africa.  I flew to the capital city, Windhoek, right in the middle of the country, and then drove to the coast for a couple days, and returned to do a little sightseeing in Windhoek.

Unfortunately, my rental car was the ever-horrible Kia Picanto, which is Korean for "tiny piece of crap" evidently.  Instead of the engine being measured in horsepower, I suspect it's measured in batpower, and as a cost-saving measure, the flapping wings of the bats serves as the only "air conditioning" in the "vehicle".

But, anyway, Namibia is quite an interesting country, and it's the other country that offered me a position for my assignment, so I kind of wanted to see what I missed by coming to South Africa.

So, some information about Namibia...Namibia is to the northwest of South Africa, and has an extensive border along the very cold South Atlantic Ocean.  It's 20% bigger than Texas, and has just barely 2 million people, making it almost the most scarcely populated country on the planet, with less than 8 people per square mile (Alaska has less than 2, while North Carolina has about 200, for comparison).

The country is extremely rural, with about 1/5 of the entire population living in the Windhoek area, and no other cities in the country having more than 60,000 people.  Windhoek is at a similar altitude as Johannesburg, but the climate is quite a bit warmer and drier, which it certainly was while I was there.

The city has a few landmarks, including this church that reminds me of a Gingerbread house, curiously located in a traffic circle at the intersection of Robert Mugabe Avenue and Fidel Castro Street. 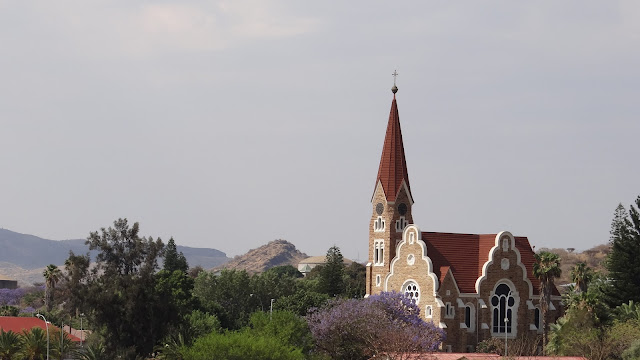 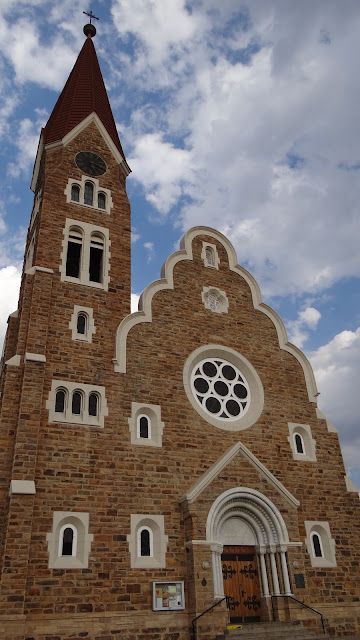 Germany joined other European countries in the Scramble for Africa in the late 19th century, and present-day Namibia was colonized as German South-West Africa in 1884.  The colony didn't last long, as Germany got drawn into World War I, and British-supported South Africa invaded and won the territory, and it ended up becoming a de facto territory of South Africa, all the way until 1990, when it became an independent country.

Certain parts of the country still have some German influence, but because the period of time under German rule was fairly short compared to other countries in Africa, it's not all-encompassing.  There are daily flights to Germany, and it is a popular destination vacation for Germans, and quite a few retirees move south to a warmer climate, much like our Florida.

As you can see in the next photo, the Jacarandas have begun to bloom, and Windhoek seems to be a bit ahead of Pretoria, as you can see from these pictures taken in front of the National Assembly. 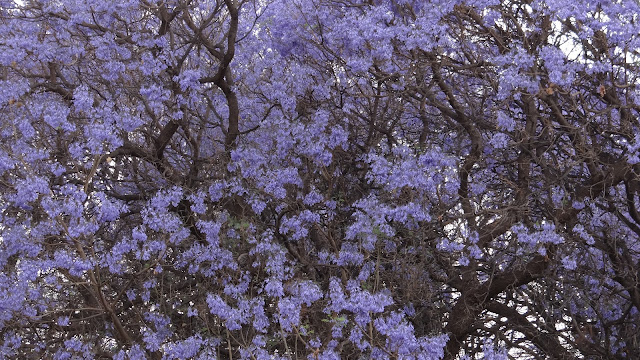 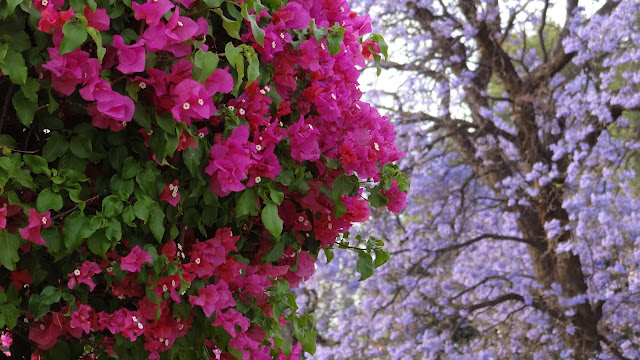 My destination for the weekend was the charming town of Swakopmund, on the coast of Namibia, about 4 hours away from Windhoek.  The drive was fascinating as the small urban center of Windhoek gave way to textbook-classic African savanna, and the road I took was actually called the Trans-Kalahari highway, which goes all the way across the southern African continent, from Mozambique to Namibia.

As you descend toward the coast, first the trees begin to get shorter and shorter until you see no more, and then the scrubby brushes get more sparse and the grass becomes thicker.  Eventually even the grass starts to thin and you see less and less until you are in the Namib desert, one of the oldest on earth.

During the four-hour journey, there were plenty of other cars on the mostly 2-lane highway, and we crossed numerous "rivers", of which only one had any signs of water.  The highway bypassed one town, and then saw just a couple of gas stations in 2 towns, the larger of which had almost 4,000 people.  The last 90 minutes of the trip included a sign for a gas station off the main road, and a couple of Uranium mines; otherwise it was just 5 parallel lines traversing the desert: train track, telephone line, power line, water pipeline and the road.

Part 2:  Swakopmund, the unusual climate of the Namibian Coast, and my boat trip to see the marine life.
Newer Post Older Post Home