Since I had already been on a nice safari, and my friend visiting had been on safari before, we decided to just do a self-drive safari at nearby Pilanesberg Game Reserve, about 2 hours from Pretoria.  Pilanesberg is becoming a very popular tourist destination, as it can be done as a day trip from Johannesburg and is not in a malaria area, unlike Kruger National Park, which is also much hotter and much further away.  Pilanesberg has all of the Big 5 animals (the five most dangerous animals in Africa) and has well-maintained, but mostly unpaved, roads that you are allowed to drive through at your own pace and routing.

We spent a few hours wandering through the park, and saw the typical popular collection of various antelope family members, like springbok, kudu and impala, as well as many zebra and giraffes.  Families of warthogs roaming along side the road, as well as many different species of birds fluttering around us as we drove at 20 or 30 km/h around the park, which is actually set in a very old volcanic crater, and makes a natural setting for assembling thousands of animals.

The park was created in the 1970s when this land was in a semi-independent nation, Bophuthatswana, and the operation that got all of the animals together in one spot remains one of the largest animal relocation projects ever completed.

Early on, we spotted a number of lazy hippos around a water hole, which was great since I had previously only seen hippo ears and eyes in the Zambezi River.  A couple of them entered or exited the water as the day began to heat up, but most seemed very content to stand or wallow in the mud flats by the water. 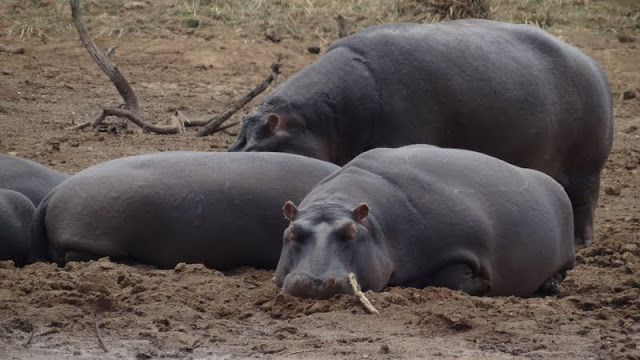 We continued to meander, hoping to spot some of the big cats, but I spent a good deal of my time making sure the car had at least 3 wheels on the ground at all times and avoiding large boulders/potholes/ditches, but still managed to find a couple of smaller animals hiding in the growing grasses.

There were quite a few zebra in the park (pronounced here as if it rhymed with 'Debra'), and they seem to get along with other animals without worry. 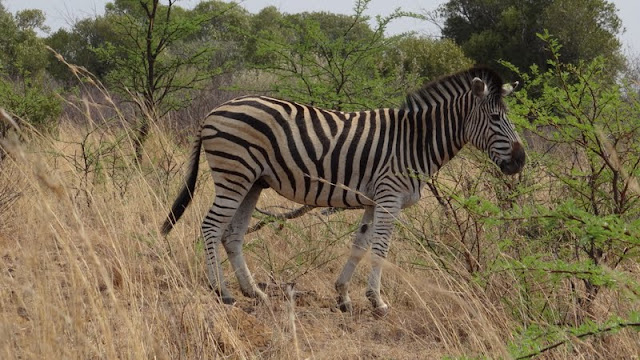 My co-pilot did spot something staring off in the distance toward us, through feathery grass, but even with a 30x zoom, my camera couldn't quite reveal what it was.  I'm not aware of any overgrown Doberman Pinschers in the wild, but trying to match this blurry shot with a list of the fauna of the park failed to yield any definitive answers.  There are a number of creatures that have a similar shape, but typically they have dark snouts and lighter features everywhere else.  Of course, it could just be a burned out log that collapsed in a dog-like pattern, but we will never know. 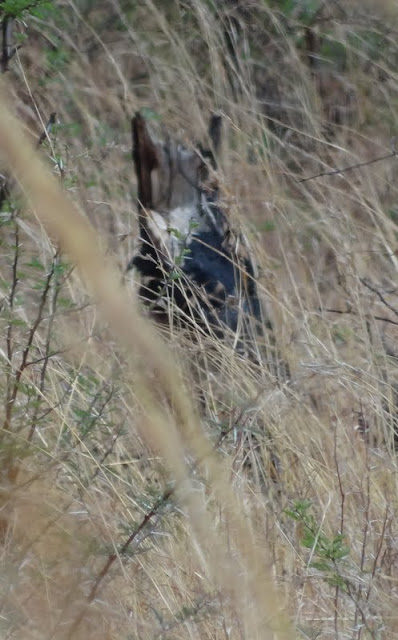 Near the middle of the park is a single historical building, an old magistrate's court that was allowed to remain during the planning of the park.  All the other structures in the 220 square mile park were demolished, but the magistrate's court is now used to house a store, picnic area and a small watering hole, in which a salt lick has been placed, which seems to be a popular feature for humans and animals alike.  Its the only place in the park in which we saw more than one species at a time, all lounging in harmony together. We were heading out of the park, contented at what we had managed to see with an amateur driver/ranger, when we spotted a couple of vehicles going extra slow on the main road, and soon down the hill through heavy grass we could spot a white rhino.  I backed the car up, and soon we figured out there were three of them traveling together.  Unfortunately, the heavy grass fooled the camera, which refused absolutely to focus on the rhinos in the background, but after a few minutes of watching the rhinos migrate one direction, we headed in the other, soon to happen upon a small herd of elephants.

While elephants look slow and rather peaceful, they can get very agitated very quickly, but fortunately, we were up on a ridge and could easily see them wandering through, and could hear their crushing footfalls as they trampled edible flora in their path, taking out small bushes, limbs, and small trees as necessary, either as a snack, or as a clearing mechanism. 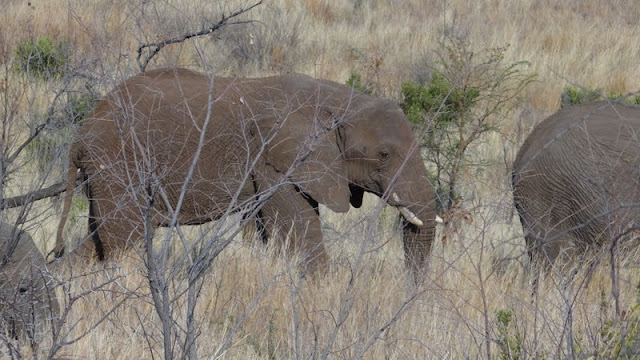 Another reason for Pilanesburg's popularity is its proximity to Sun City, a "luxury" resort and casino enclave that was built in the late 70s, as the game preserve was opening.  Since it was very close to South Africa, but not technically in the country, laws were a bit different, and gambling was allowed, and so the resort and its large auditorium became very popular, attracting musicians like Elton John, Tina Turner and Frank Sinatra as well as a number of heavyweight boxing matches.

By the mid-1980s, though, a number of musicians began to speak out against apartheid and the popularity of the complex waned.  After the end of apartheid, Bophututswana was re-incorporated into South Africa, and the area began to develop and prosper, hosting the Miss World pageant a number of times, and becoming the "Las Vegas" of South Africa.

Any resemblance to Las Vegas appears to be related solely to the presence of slot machines, of which there weren't all that many.  I didn't see all of the property, but was very glad to leave after a quick visit.  It felt like a Disney property that lost its maintenance crew a dozen years ago and they forgot to re-hire.  But, it remains a very popular destination as a weekend getaway from the high pressure city life for South Africans, and continues to win such prestigious awards as Diners' Club Wine List of the Year.