By the time I land at RDU next week, I will have taken 16 flights on 6 different airlines via 8 different airports

O R Tambo is the main airport here in Johannesburg, and it is one of just a few airports from which you can fly nonstop to any other inhabited continent.  No airport in the US can say that (East coast airports don't fly to Australia, and the West Coast isn't linked to Africa).  The airport is the largest in Africa, but there are dozens of airports around the world that are larger.  It ranks somewhere between Salt Lake City and DC National in terms of passengers, but feels so much larger, probably because such a large portion of its flights are international.

Quite a few airlines fly the new Airbus 380 to and from here, mostly from Europe, and just a couple of weeks ago, Africa's first Boeing 787 Dreamliner landed, as Ethiopian Airlines began using it on their route from Addis Ababa.  After my last flight from Namibia, I managed to snap a quick pic of this Lufthansa A380, which flies daily from Frankfurt. 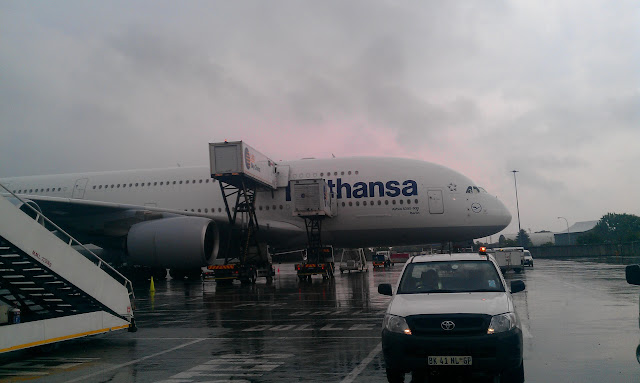 Notice the double row of windows, since it's a two-story plane, and Lufthansa's configuration can hold more than 500 passengers on a single flight, 10-abreast in Economy Class.

Security when traveling here varies greatly by country.  At O R Tambo, there are different gates for domestic and international flights, but the security is pretty consistent.  Shoes stay on, and the lines are very short.  They have you take out your laptops, but otherwise it's really quick and efficient.  Compared to Zimbabwe, where we had to remove our shoes and dump the water bottles.  When asked, the gate agent just said, "That's how they do it in the States!"  Upon landing in Zimbabwe, my collapsible walking stick was totally dismantled, so it could be checked for drugs, which meant the rest of my suitcase was fare game for a thorough inspection.

On a number of our flights, the flight attendants were required to spray insecticide before we were allowed to land in certain countries.  It's a particularly noxious chemical, masked by an even more noxious "air freshener".  At least they warned us about it, unlike 20 years ago when I nearly panicked when a man in a HAZMAT suit ran down the aisle of my Dominican Republic-bound plane unannounced, two cans of insecticide blazing, causing an entire planeload of confused passengers to begin unison coughing fits.

On my trip to Mozambique, I flew the national airline of Mozambique, LAM.  It wasn't until I returned that I learned that LAM was forbidden from flying in Europe because of their spotty safety record.  I should have realized that something was up when I noticed my seat still had an operable ashtray and that the couple across the aisle just put their luggage under their feet, since it was as big as the seats themselves.  Both flight attendants looked at the giant case and just kept walking.  At least they gave us some nice guava juice and a croissant with cheese and butter.

There are some low-cost carriers here in South Africa, and I flew the two most popular, Kulula and Mango, and couldn't have had more different experiences.  Kulula is known for their cheeky humor and clever in-flight crew.  Some of their livery is painted as if it was an introductory diagram for new pilots, as you can see in this picture I borrowed from the 'net:

The loading of the flight was absolutely by far the quickest I have ever encountered; the time from ticket scan to takeoff was barely 15 minutes.  South Africans line up in giant snaking queues for quite a while before they board the plane, which I thought was a bit annoying, but it actually seemed to speed things up, since you didn't have to bore your way through the throngs of people who will eventually sit behind you just to get to the gate.  Airlines here also don't charge luggage fees for your first bag, so the number of roll-aboards that have to be accommodated are much fewer, making loading much quicker, and many airlines use both the front and rear doors to load passengers, which really speeds things up.  There aren't all that many jet bridges at the airports here, so you usually enplane and deplane right on the tarmac, with either a bus ride or quick walk to the terminal.

Mango, on the other hand, is the Kia Picanto of the airline world, and I think only people under 3 feet tall could actually fit their legs into the allocated space; fortunately they found some exit-row space for us on the return leg so I didn't have to visit the knee-cap store after landing.

The low-cost carriers, like most carriers in the US, offered to sell us some snacks and beverages, but on regular flights, there was a meal served on every leg, even if the flight was just an hour or so.  The meals weren't huge, but most were surprisingly edible, the unidentifiable mysterious non-trademarked "hot pocket" on Delta notwithstanding.  And since South Africans love their wine and beer, they were complimentary with our meals.

The most modern airport I encountered was the one in Mozambique, which although smallish, was really very nice and clean.  With South Africa hosting the World Cup in 2010, nearby Mozambique had the smart idea to polish up their airport with a bright new terminal and expansion to make it an attractive side destination for all the soccer enthusiasts, and they proudly opened their remodeled airport in November 2010.  Just 4 months after the end of the World Cup.  Oops.