Friday started out a bit gray and rainy, but as we headed south down the eastern side of the peninsula, the weather started to improve, and we made our way to Kalk Bay to find breakfast at a local cafe that has been popular with the American diplomatic community.  Kalk Bay is still very much a fishing village, and if the main road hadn't been under total reconstruction, we might have spent more time, but we had a lot to see.  After a tremendously large and tasty breakfast, we headed south to our first tourist destination, Boulders Beach.

Boulders Beach is so named because of all the giant granite boulders that line the shore; this is all in False Bay, where the water is a bit more tranquil than oceanside, but most people come here to see the penguins.

Yep, that's correct--penguins.  Boulders Beach is one of the few places in the world where penguins live adjacent to humans.  As Bugs Bunny once found out, penguins are a Southern Hemisphere feature, living mostly in Antarctica, and in the southern and western flanks of Africa, South America, Australia and other southern islands.  The penguins here are African Penguins, just 2 feet tall, and migrated from offshore islands directly onshore about 30 years ago.  As commercial fishing in the bay decreased, the penguins were able to move to a better neighborhood, away from the sharks, seals and whales that find them tasty, to the humans who find them (mostly) adorable. 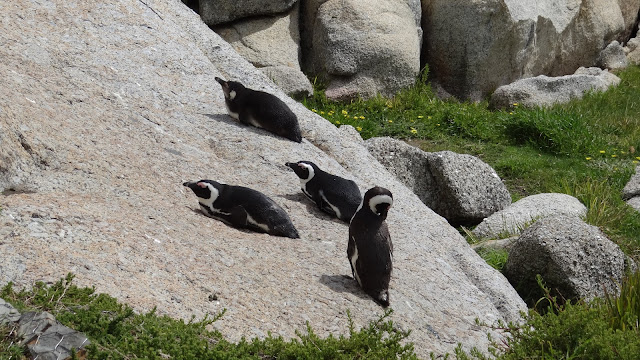 In summer, the water is warm enough for humans to swim in, and the penguins don't seem to mind being around humans, and you can share the water with them.  It was a bit too chilly for swimming in October, but the penguins didn't mind, and it was fun to watch how inept they were on land, and then to see how amazingly adept they were, diving under waves effortlessly, popping up for a second, only to see another wave approaching, and disappearing again into the foam. 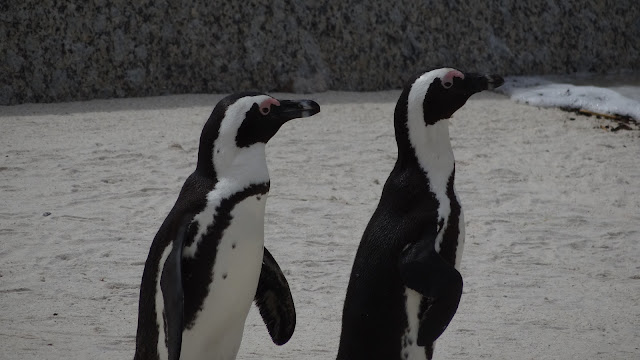 Unfortunately, the African Penguin is endangered, and the future doesn't look terribly bright for the species.  100 years ago, there were about 4 million African Penguins in South Africa and Namibia, the only places they live.  The population is down by 95%, and only 50,000 or so penguins are left; many groups are working to protect the species, but it is not clear that the population will recover. 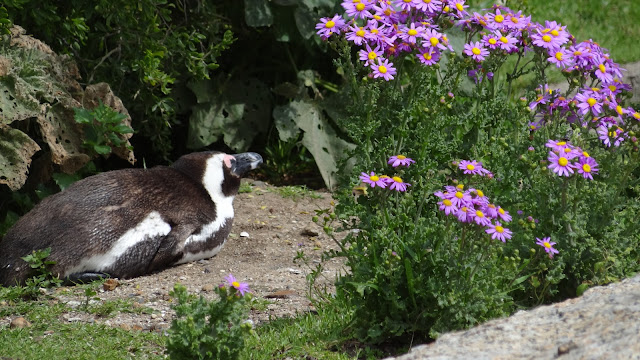 The penguin also got a name upgrade, as they used to be known as Jackass Penguins.  When we heard what sounded like the International Donkey Convention of 2012 through the woods, we understood exactly why they had the previous name.  If you are just listening, you would swear that braying donkeys were just around the corner. 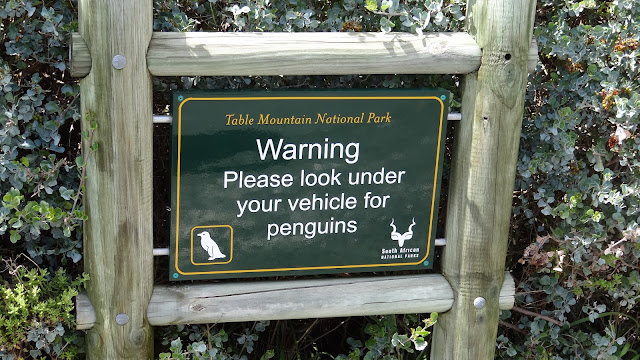 After we dutifully checked under our car for penguins, we continued to head south, until we could go no more, having arrived at Cape Point, the southeastern most point on the peninsula, a rocky and craggy bit of land that juts out into the Atlantic Ocean, signaling the start of False Bay.  The point is a popular tourist spot, and offers lots of hiking up and around the area; we opted for the funicular, named for the legend of the Flying Dutchman, a ghost ship that haunts these waters (probably more famous for its appearance in the geographically-misplaced Pirates of the Caribbean movies).  The funicular took us up near the base of the lighthouse, for some fantastic views all around. 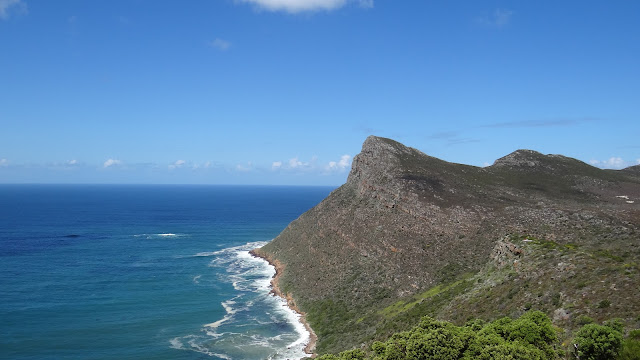 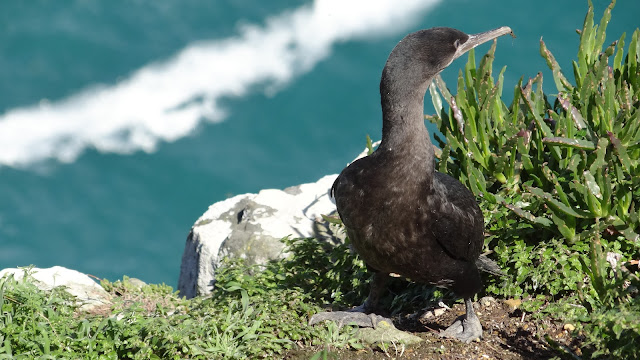 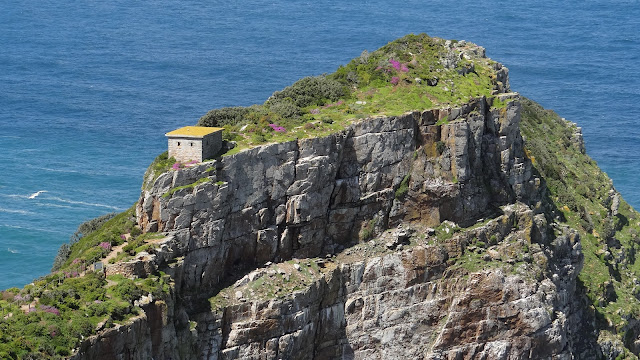 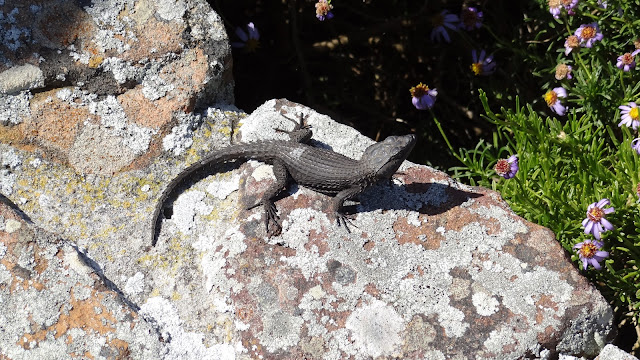 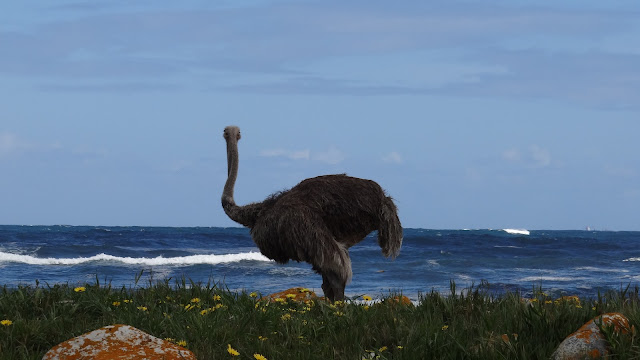 We continued west to the actual Cape of Good Hope, where we enjoyed a picnic in the car while watching the waves crash over and attempt to wash away various seabirds, and sadly fail at knocking over some stupid tourists venturing well beyond all sensible limits.  The Cape of Good Hope is the southwestern most point on the continent, and for early sailors trying to find a route to the Far East, it's the point where they finally stopped sailing south and got to turn to the East, to their dreams and destiny, and they definitely hoped that the trip would be good.  The hundreds of shipwrecks offshore are testament to how incorrect that sentiment might be, but the Cape remains one of the most well-known points of maritime reference in the world, and draws many visitors, all who must have their picture taken at the man-made sign... 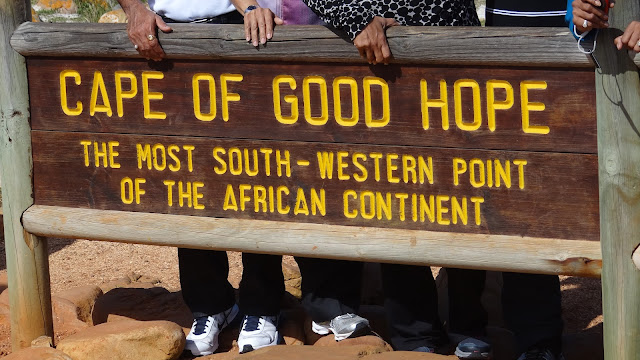 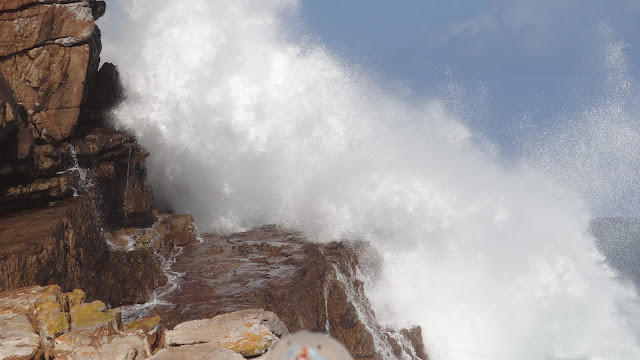 We continued clockwise around the peninsula, finally encountering a troop of baboons that we had been warned about previously while driving. The previous warnings for porcupines and penguins on the road were unfortunately unfounded.  This route also took us along the coast on the amazing Chapman's Peak Drive, a nearly-century old road that was carved out of the sandstone and granite. 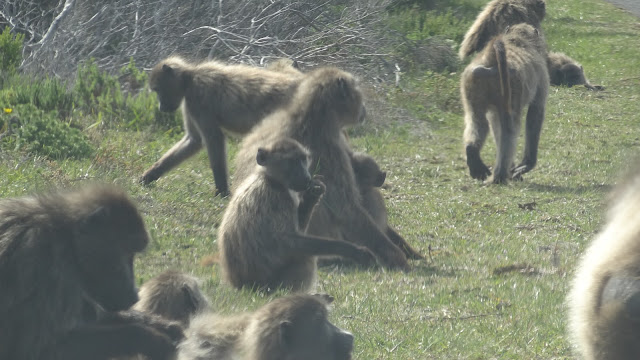 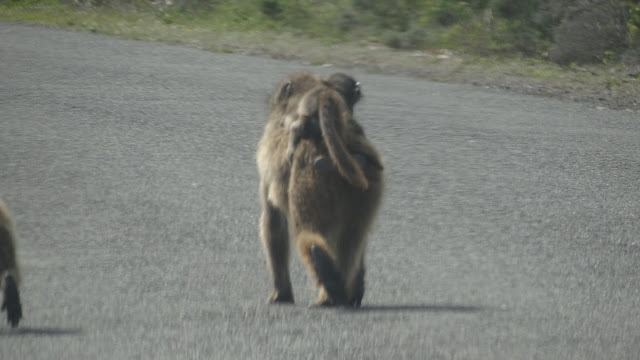 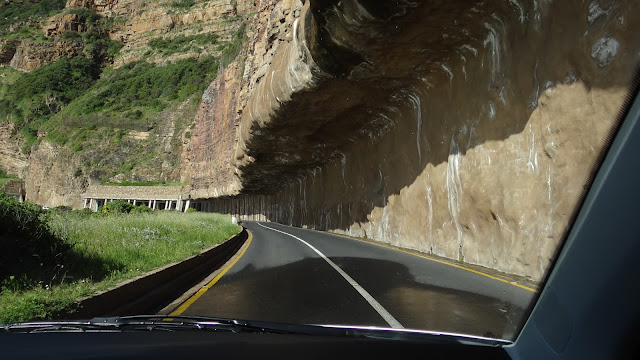 The entire Cape Peninsula is part of a unique Floral Kingdom and has many plants found nowhere else on the planet.  I'll be posting a lot more plant and flower pictures soon, but here are some of the amazing wildflowers found in this part of the world. 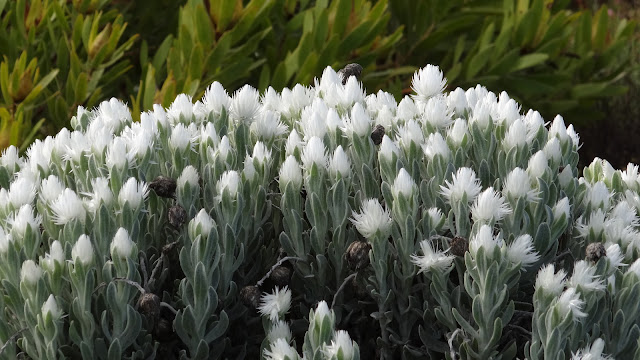 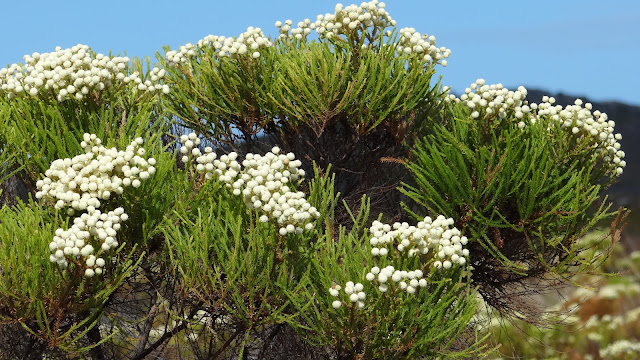 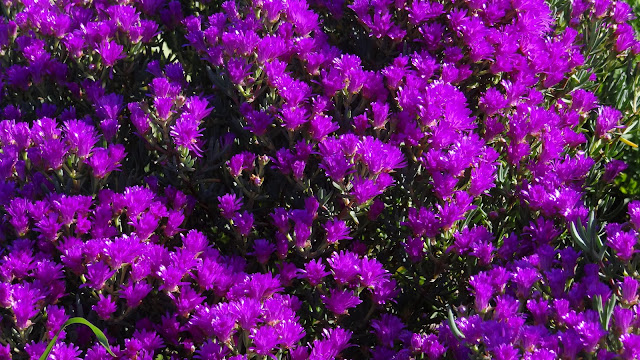 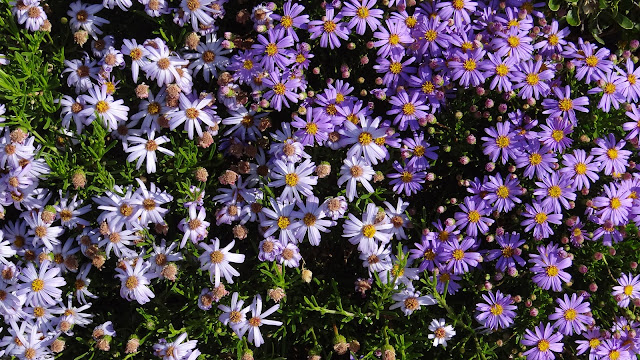 Fortunately, the days are lengthening here, which left us just enough time to ascend Table Mountain, itself, which was very good, as clouds lingered for the rest of our time in Cape Town, and this was definitely the best time to come up to the Table.

You are allowed to hike up the 3500+ feet to the top, should you wish, but when there is a rotating cable car, why would you do that?  The cable car capsule itself is pretty amazing.  I really had no clue how it would rotate, but it works like a revolving restaurant; the core of the car is stationary, and those of us trying the get the best view in a round enclosure end up rotating 360 degrees during the ascent and descent, getting to see the entire panorama of Cape Town. 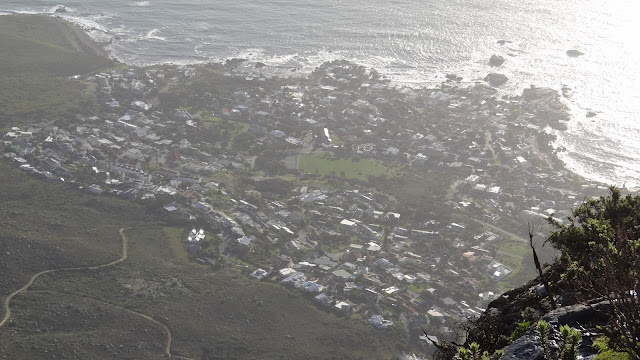 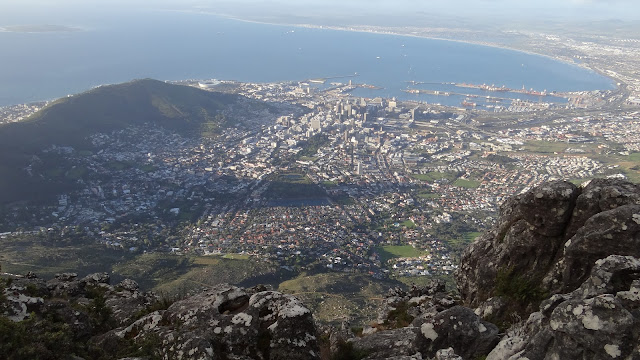 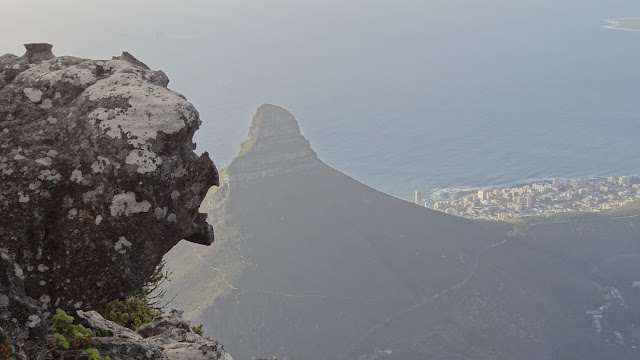 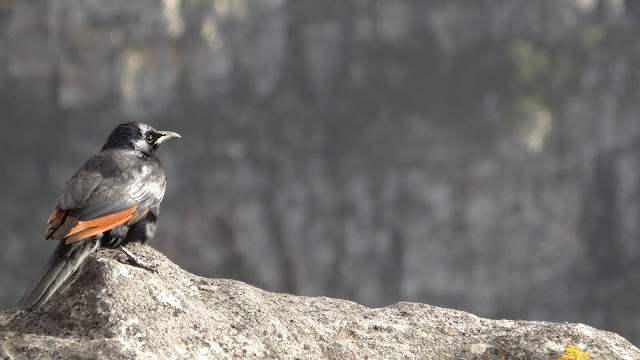 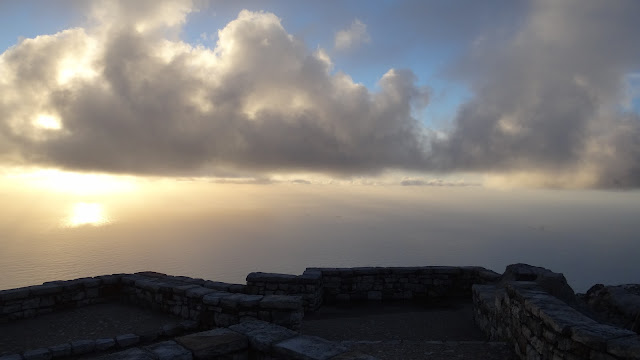 I have a few videos to post, but I am having difficulty getting them all sorted, so I will put them in a special post if/when I can get everything to work out.
Newer Post Older Post Home