Last week, I took a couple of days off, and flew with my friend on South Africa's cheapest airline, Mango, to Cape Town for a proper 4-day vacation.  I'll write another post about what it's like to fly in Africa, but Mango certainly deserves a mention as cramming the most number of people into the smallest space possible.  Fortunately the flight was only 90 minutes, just a few minutes shy of my needing emergency chiropractic care.

Our home base for the 4 days was the Breakwater Lodge, near the waterfront.  The lodge has been extensively modernized and renovated, but was actually built 150 years ago as a prison.  Britain had already had success exporting its criminals to Australia, and they were eyeing South Africa as a closer alternative, but the locals did a pretty good job of making sure the prison system didn't grow too fast.  British convicts helped to build the Breakwater (bulkhead) that still line the harbor in Cape Town, and eventually the prison was converted into a camp for juveniles offenders, and then finally a hostel for dock workers, all the way until 1989.  The fresh and modern hotel is a great bargain, and very conveniently located to the popular waterfront part of town.

Our first day in Cape Town was quite cool and very rainy, so I was in very good spirits.  South Africa's famous wine industry is based in the conveniently-named Winelands region along the base of the mountains just outside of town, and hiring a private driver for a day is quite affordable here, so that's exactly what we did, and enjoyed a great memorable (and mostly rememberable) day of "sampling" wines at different wineries in the region.

Our first stop was Tokara Winery, a somewhat new estate on the edge of Stellenbosch that has a variety of red and white wines, along with brandy and even olives that are grown on the property.  The ultra-modern tasting room had some great views of the hills surrounding the estate, an inviting fire in a large fireplace, some great art painted with Merlot "ink", and even a cat. 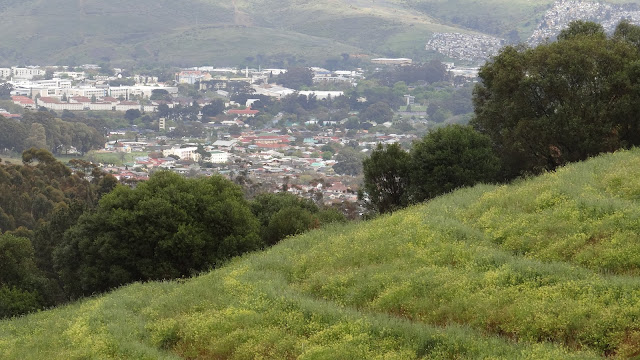 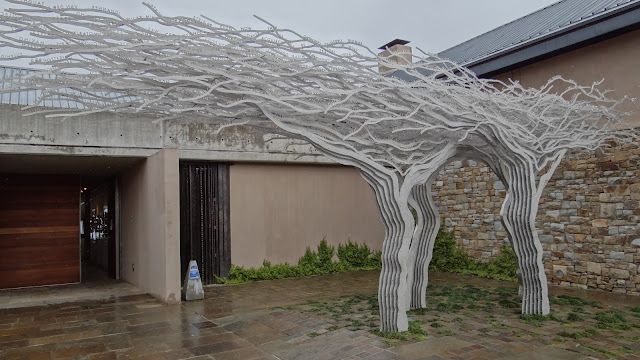 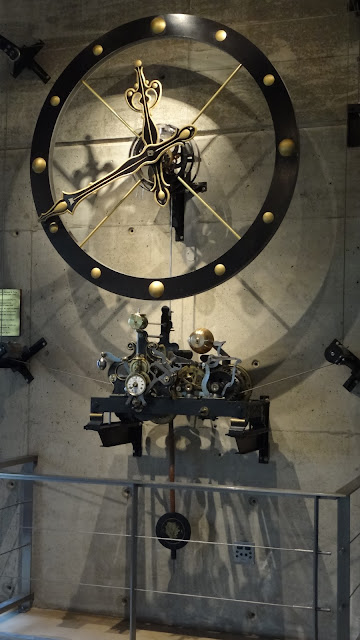 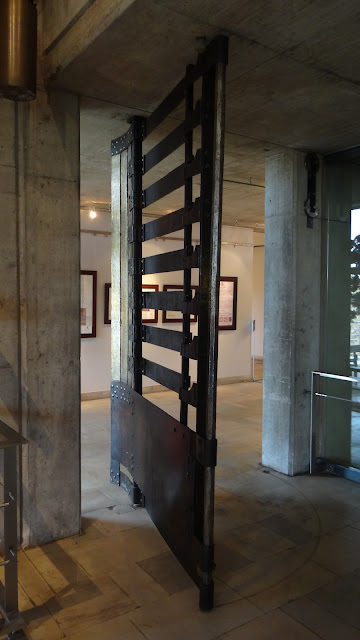 After sampling just an ounce or two each of 6 of their wines (plus a brandy), we headed out to a winery that specialized in "Champagnes", which is in quotation marks, because this is not in the Champagne region of France, so the sparkling wines here cannot be correctly called Champagne.  Here, they are known as Méthode Cap Classiques, or in other words, Champagne.

The first place we attempted to visit was closed for remodeling, so our knowledgeable driver/guide switched gears, and took us to a very upscale winery, Haute Cabrière, with a subterranean tasting room that felt like it was designed for hobbits or possibly Smurfs.  But, once the bubbly started flowing, the lack of a scenic vista inside the tasting room became much less important.  We enjoyed sampling 6 rather full glasses of fake Champagne, pretending to understand all the differences in the carbonic maceration (bubbles), the mousse (no clue), the bouquet (aroma), and trying to figure out, despite my colorblindness, just exactly what color "pale biscuit" is.

Haute Cabrière's wine charter was granted in 1694--yes, with a 16--and is located in the culinary capital of South Africa, Franschhoek ("French Corner"), which was settled by French Huguenots just a few years before the winery was started.  The town is very quaint, and features some great examples of the unique Cape Dutch architecture, of which I was unable to capture with my camera by this point in the day.

As best I can recall, here are some pictures of the scenery surrounding Winery #2 from outside: 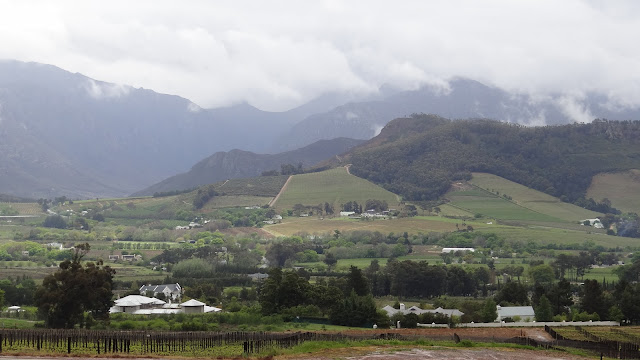 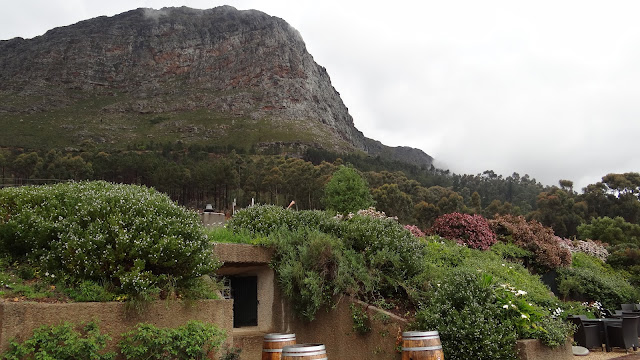 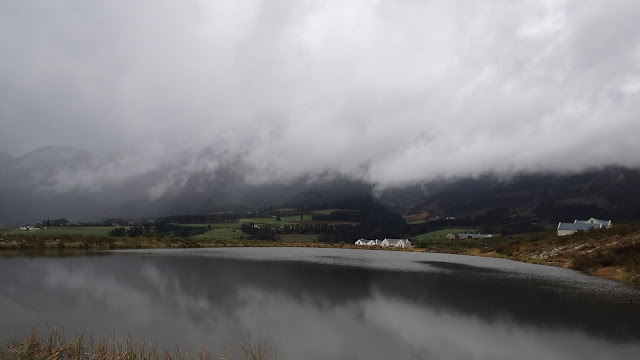 As one might imagine, the time required to "sample" 6 champagnes increases with each new glass, and as we hadn't eaten, we told the driver that our next stop needed to be food-related, and we ended up at La Motte, a much younger winery than our last stop, not bothering to start growing grapes until 1752.  We never made it to the wine tasting, mostly because we didn't really need more wine, but also because we were easily lured into the amazing Pierneef restaurant, which specializes in modern takes on centuries-old recipes brought with the settlers from Europe.

Fortunately the menu was easy to read, even though it kept moving around in front of me, and I had a delicious Caramelised Baby Onion, Apple and Sage Tarte Tatin, accompanied by tomato and red pepper jam with herb vinaigrette.  My friend had the Hazelnut and Lemon crown-roasted Chicken Breast, served with a sweet potato and caramelised shallot galette, doused in a honey, rosewater and saffron sauce.  Everything was served on slate dishes and was gorgeously presented.  We both thought to take pictures of our food just as we finished the main course, and then decided a picture of an empty plate probably wasn't too interesting.  It was a bit difficult to finish the meal since we started with one of the best baguettes I had ever had, served with soft butter that had been rolled in crispy fried onions.  I think the waiter was concerned that I was going to try to eat just that for lunch, and had it been possible, I would have.

The desserts sounded wonderful, and we foolishly each ordered our own.  Mine had 11 words in the title, and my friend's had 13 words, and while the presentation was amazing and the taste was good, I think we both felt the dishes were extremely complicated and a bit jumbled, but nevertheless, it still easily ranks as the best meal I have eaten in South Africa. 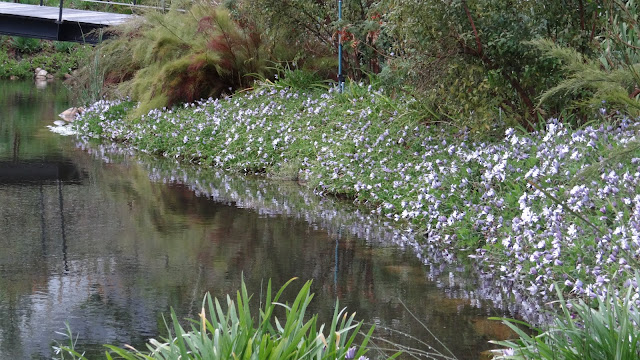 As the cumulative effects of the day's tastings began to wear off, I did manage to take this picture of the flowers on the lake adjacent to the restaurant, and somehow our 8-hour tour of the wine country was over.  We headed back to Cape Town proper, and eventually wandered down to the waterfront for a very pedestrian dinner, and retired early to prepare for Day 2, wherein we traveled to the Cape of Good Hope.

I am off to Namibia for Columbus Day weekend, my last big trip in the region, as my time here winds down. I will be back next week to recap the rest of Cape Town, and try to catch up on all the other posts in the works.