Nearly 150 years ago, someone found a pretty stone along a river in South Africa, and it turned out to be a 22 carat diamond, and thus began the South Africa diamond rush.  Together with gold, these two mineral deposits helped fuel the growth of the early South African republic, and mining still represents nearly 1/5 of the economy of the country.

South Africa is not the leader in production of diamonds (or gold), but is still a top 10 producing nation, and yesterday, I went to visit the Cullinan Diamond Mine, just outside of Pretoria.  The Cullinan Diamond Mine has been in operation since 1902, and just 3 years after it was started, the world's largest gem quality diamond ever found was recovered from Cullinan.  Weighing over 1.3 pounds, the diamond was nearly 3,107 carats in size, and remains the largest gem-quality diamond ever found on the planet, even 107 years later.

The diamond was called the Cullinan Diamond, and was presented to King Edward VI for his birthday; it had a couple of significant flaws, and so the rough diamond was cut into 9 major diamonds, and nearly 100 small diamonds.  The largest diamond is over 530 carats, and is called the Star of Africa, and all 9 of the diamonds are part of the Crown Jewels of the United Kingdom. 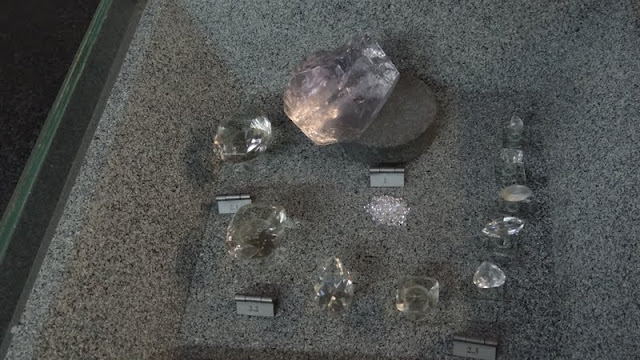 Replicas of the Cullinan Diamond, the 9 major gems cut from it, and the nearly 100 smaller diamonds.

The Cullinan Diamond Mine is also the largest source of blue diamonds in the world, and one of the largest producer of giant diamonds (over 400 carats) anywhere.  It is estimated that the diamond field in Cullinan contains over 200 millions carats in diamonds, and should allow operations to continue for another 40 or 50 years, at least.

From Natural Science class, you might remember that diamonds are basically carbon that was compressed millions of years ago into transparent crystals, about 100 miles under the surface of the earth.  The only way, then, for the diamonds to get anywhere where humans can get to them is for a volcanic eruption to occur, forcing the diamond-containing rocks (called Kimberlite) to rise near the surface.

Diamond pipes are shaped like carrots, with the top of the carrot possibly right below the earth's surface, and so giant pits are dug to begin the excavation process.  As technology evolved, it became more efficient to move mining operations underground, and the bottom of the giant pit now collapses further down (in a controlled manner) as the kimberlite is excavated and sent to the surface to be processed.

The Cullinan Big Hole, from the near side to the far side is 10 football fields long, and the hole is currently as deep as it is wide, over 1600 feet.

Kimberlite is a very soft material and dissolves in water, so the rocks that are excavated are mixed with water and sent to large rollers with optical eyes and sensors that crush the rocks until something harder is discovered, and the process continues until the rough diamonds are extracted from the kimberlite. 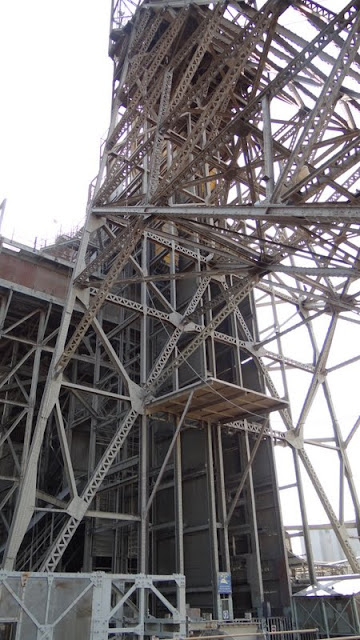 Cullinan Diamond Mine Shaft #3, where all of the diamond-bearing rock is transported to the surface.

The Cullinan mine focuses on Gem-quality diamonds, which are just 20% of the diamond market.  The other 80% of diamonds that are too flawed to be sold as gems are sold as Industrial diamonds, prized for their absolute hardness ('Diamond' comes from the Greek word for 'unbreakable').  These diamonds are used for products like diamond-tipped saw blades, dental drills, and even abrasives.

DeBeers (the international diamond conglomerate famous for the "Diamonds are Forever" advertising campaign) owned the Cullinan Diamond Mine since World War I, but was sold to a European consortium about 5 years ago.  Two years later, a 507-carat rough diamond was found in the mine, and was of an exceptionally high quality; one of the 20 best and largest diamonds ever found.  It was sold, uncut, for over $35 Million, the most expensive rough diamond ever sold.

Unlike precious metals, which have a standard commodity value reported daily, diamonds are sold at an extensive mark-up above the cost of extraction, and at the end of the tour, we were deposited into a diamond showroom; the tiniest sliver of a diamond was marked at about $600 and the prices went up into the five digits very quickly, and there were some other rooms where I am sure you could drop even more money; there was no appearance that prices were any better at the source than anywhere else.