While Pretoria is perhaps not quite as exciting as its nearby neighbor, Johannesburg, it does have a few sights worth seeing.  The city is ringed by hills, and has a fairly large CBD (Central Business District, the term for downtown in these parts).  Pretoria, with its 125+ embassies and missions is second only to Washington DC in the number of foreign embassies.  A couple weekends ago, I got to visit the two sights at the highest points of the city. 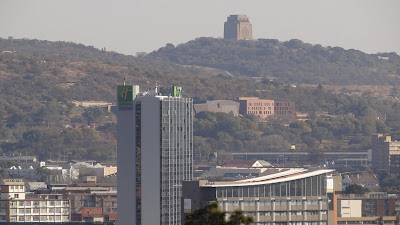 On a hill on the south side of town is the Voortrekker Monument, a huge granite cube that is 40 meters on all sides, built in the 1930s and 1940s to commemorate the Voortrekker emigration, the Dutch Afrikaaner colonists who emigrated from the coast east of Cape Town to the interior of South Africa in the 1830s and 1840s.

Inside the monument is the largest marble frieze in the world, consisting of 27 panels crafted in Florence, Italy, depicting the story of the Voortrekker's trek (actually an Afrikaans word that you know, meaning a long journey, hence Voortrekkers).  This is just part of the first panel below, and the panels completely encircle (ensquare?) the inside of the cube on the main level.

Depending on who you ask, you will get different views on the monument; as you might expect, an expedition by European-descended "settlers" in Africa nearly 2 centuries ago probably didn't go so well for the local populations, similar perhaps to some European "settlers" that arrived in North America a century or so before that.  So, the monument represents many different things to many different people, but it is not universally admired for what it commemorates.  However, as an architectural object built in the Art Deco style, I found the building quite interesting.

The first picture above was taken from across the city, on the grounds of the Union Buildings, built exactly a century ago, from 1910 to 1913, which serve as the seat of government for South Africa.  In 1910, a number of colonies and republics joined together to form the country then known as the Union of South Africa, and so the buildings serve sort of as a combination capitol building and President's office, where the presidents of the now-named Republic of South Africa (hence the RSA abbreviation in the Olympics) are inaugurated every 5 years.

At the time it was built, it was the largest building in South Africa, and some think it was the largest building in the Southern Hemisphere at the time.  It was designed to house the entire work force of the South African government at that time, and continues to house the President and Department of Foreign Affairs.  You can also see in the top picture that there are no buildings obstructing the direct view of the two monuments from each other, as stipulated by law.