Last weekend, a friend and I flew to Durban, South Africa's 3rd largest city, on the Indian Ocean Coast.  It's about a 7 hour drive or a 50 minute flight to King Shaka International Airport, so we flew on one of South Africa's budget airlines, Kulula.com to maximize our time at the coast.

The Durban metropolitan area has over 3.5 million people, and has no racial majority.  Three different races  (Black, Indian and White) each comprise between 25% and 40% of the population, and is home to the largest population of Indians outside of India.  Most of them are descendants of indentured servants who were imported by the British to work in the extensive Sugar Cane plantations in the late 19th Century.

The city is a popular beach resort, and even though we were there in mid-August (late Winter here), it was pretty warm, and there were plenty of beachgoers, despite the chilly Indian Ocean water.

In 2010, South Africa hosted the World Cup, and quite a few games of the quadrennial soccer tournament were held at Durban's Moses Mabhida Stadium.  Built for the 2010 World Cup, the stadium's roof is supported by a unique Y-shaped arch that was designed to represent the South African flag, of two divided pieces coming together to form one united steel beam country. 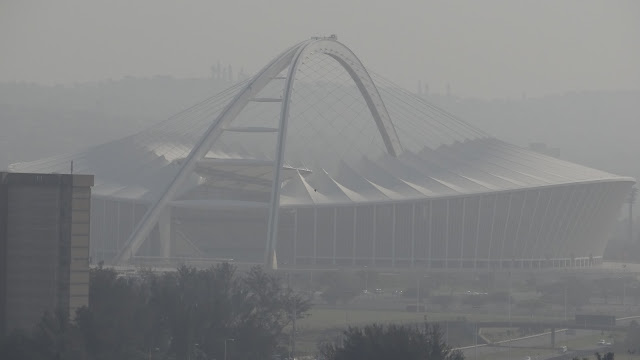 After wind foiled our first attempt to take the funicular up to the platform on top of the stadium, we were successful on our second day, and got to enjoy a fantastic view of the city and beachfront. 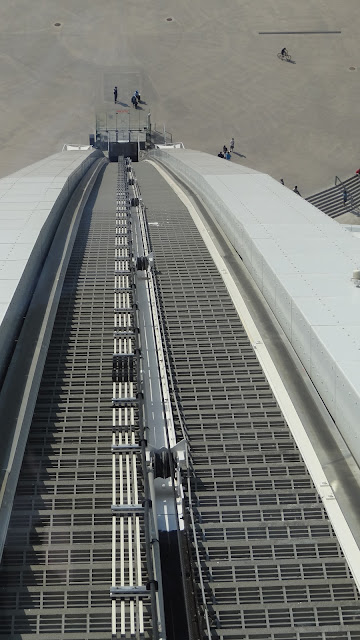 Looking down the funicular track toward the base of the stadium. 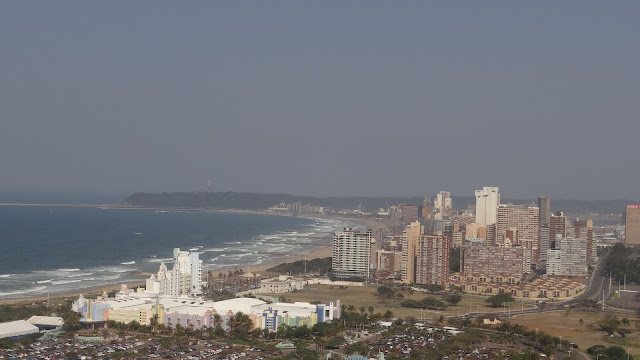 A view of Durban and the Indian Ocean coast from the top of the stadium. 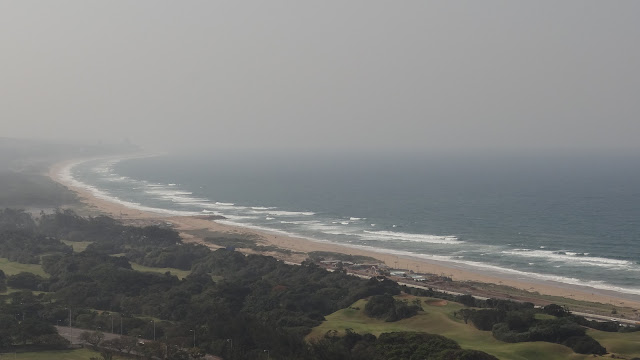 We also got to go to uShaka Marine World, which is a combination of a world-class aquarium, a water park, and a small version of Sea World, complete with seal and dolphin shows.  The aquarium is the 5th largest in the world, and is the most unique setting for an aquarium I have ever seen.  You basically enter what looks like a large salvaged ship that ran aground decades ago and has been languishing ever since.  Once you get underground, in the hold, you enter the world of the fish, housed in giant tanks.  I had trouble determining whether or not we were in a real ship, or something that was just designed to look like an old ship, but they did a fantastic job of confusing me, as it appears it's all just a fake setting to enhance the aquarium experience.

The entire cast of Finding Nemo was available to see, as well as some other interesting fish from the Southern Hemisphere that I had never seen before... 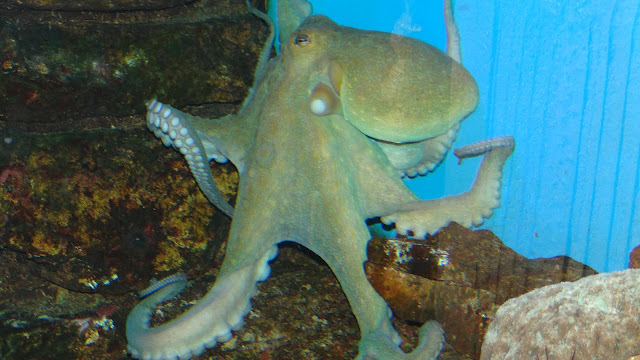 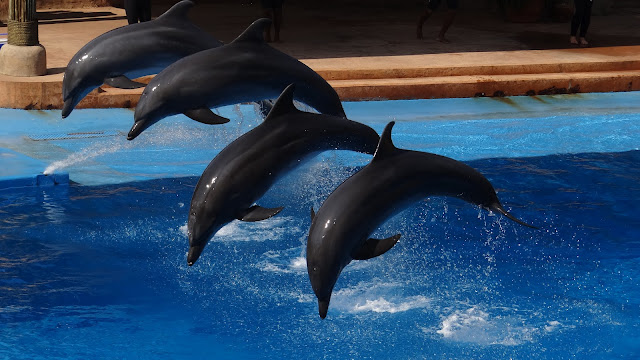 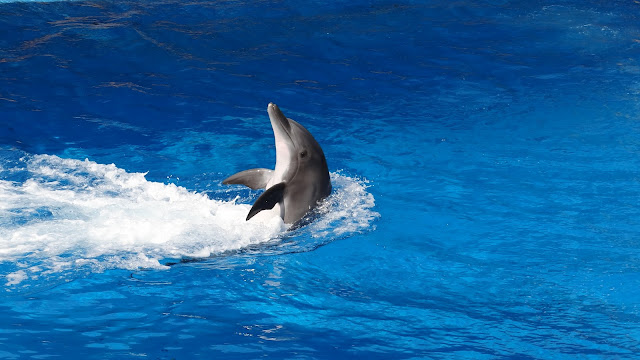 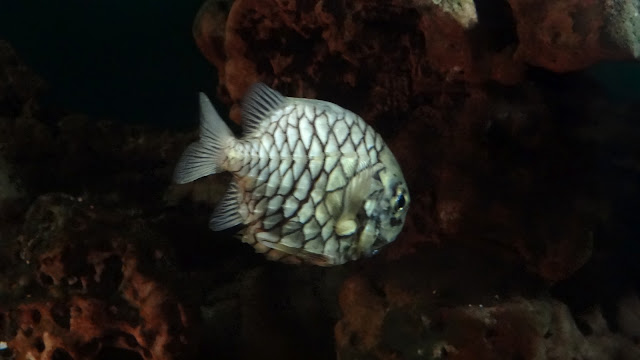 The very cool and somewhat rare Pineapple Fish, from the Eastern Indian Ocean, that has colonies of bioluminescent bacteria that live near its mouth 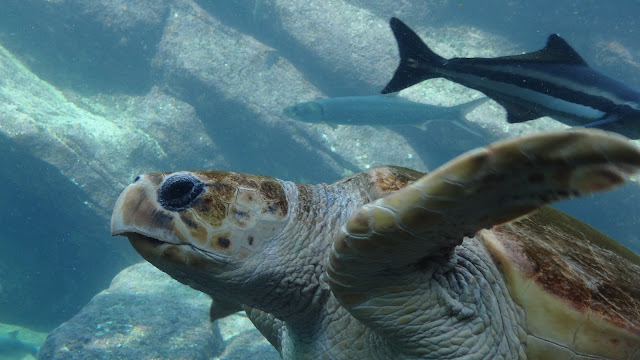 Sea Turtle that was actually swimming around 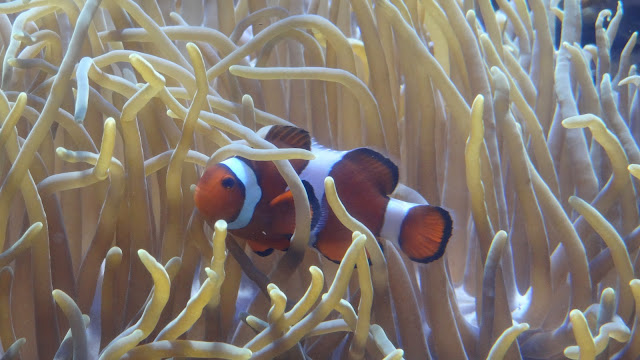 Clownfish, nestled in amongst some sea anemone tentacles, where they are frequently found, due to their symbiotic relationship.  Clownfish are one of a very few fish that are immune to a sea anemone's toxins. 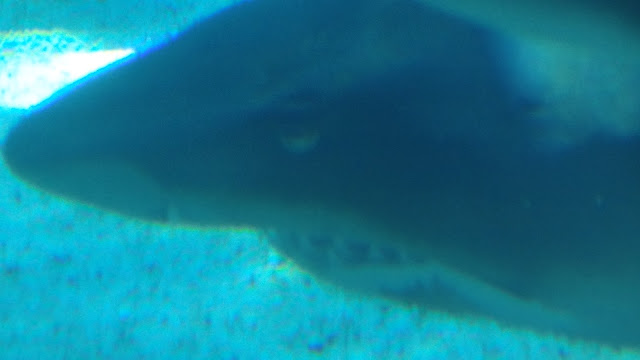 A blurry shot of the very menacing Ragged Tooth Shark.  Not a fan, hence the blurry camerawork.

On our way back to the airport, we drove along the undulating coast, replete with sugar cane fields, and passed through Umhlanga Rocks, a resort destination just outside of Durban proper, and home to the Umhlanga Lighthouse. 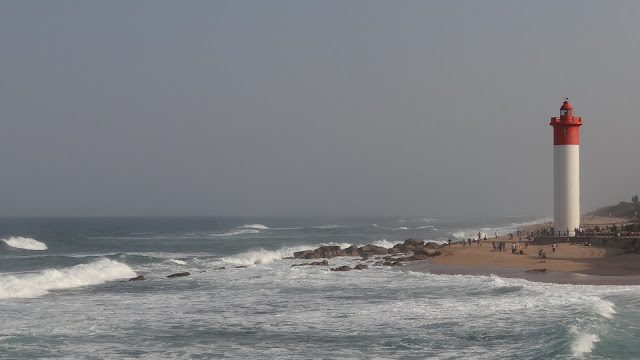 All of that, plus some shopping made for a very busy, but fun, weekend.  We did manage to get our feet wet in the coldish water (and some of our pants, due to a rogue wave that arrived while we were busy watching a gifted wavesurfer), but still managed to enjoy a first visit to the Indian Ocean.