Over the weekend, my colleagues and I went to Madikwe Game Reserve, about 4 hours northwest of Pretoria by car, just outside of the capital city of Botswana, Gaborone.  The park is a protected area about the size of Durham County and contains a couple dozen lodges.  You can only access the park by making a lodge reservation, and included in our two days of lodging was 13 hours of safari trekking, all over the Reserve.

Our lodge had 10 rooms, each individual chalets, spread out across a ridge overlooking vast plains of bushveld and grasslands.  The chalets are located in the park with all the animals, with just a thin electric wire designed to keep the elephants from munching on the thatched roofs.  We were escorted to our rooms after dark each night by a ranger with a rifle, just in case there was a surprise waiting for us.

It was a bit chilly, but the drives were magnificent, and we saw dozens of species of birds and animals, including lions, elephants, white rhinos, African buffalos, the magnificent gemsbok, wildebeest, jackals, a hyena, impalas, zebras, giraffes, warthogs and plenty more.  We got lucky and watched two prides of lions attempt to hunt wildebeest.  I was OK that they were unsuccessful, but it was still exciting to watch the lions in action, in one case just 30 or so yards from our Land Cruiser.

As I prepared to leave the chalet to load the car, I noticed something peering back at from me from the rock wall on our deck, and discovered that a tribe of chacma baboons was passing through.  We saw at least a dozen ambling through our 'back yard', even babies hitching a ride on their mothers.

The ride to Madikwe was on the major toll road that heads to Botswana; a 2 or 4 lane road in pretty good condition with fast speeds, and even faster cars passing frequently.  On the way back, we returned on a regional road that was very different.  While it was free, it was riddled with sand-filled potholes of varying depths and potential to ruin a trip.  There were lots of warning signs, that sometimes aligned with oncoming potholes, but because of all the impatient drivers, it often felt we were in rally mode.  At one point, I counted 7 cars spread out behind me in all possible lanes and shoulders all attempting to pass each other simultaneously.  I expect we will stick to the toll roads as much as we can from now on...

Click on my Zebra friend below to see the best pictures from my first African Safari! 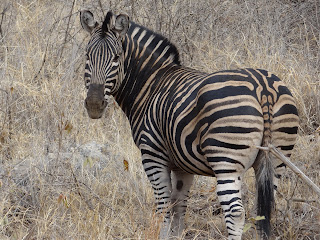