I got a car this weekend, and got to practice driving on the other side of the road.  I had driven on the left before, but only in Ireland, where the tiny roads and curves limit your speed; not so in South Africa.  The major road between Pretoria and Johannesburg was upgraded for the 2010 World Cup and is a fast-moving Superhighway with a 120kph speed limit (75 mph); the drivers either seem to go half the speed limit or close to double; it feels like driving in Northern Virginia or New Jersey.

As I drove, I kept seeing the word "Robot" painted on the pavement or on signs, "Robot ahead".  I never was able to figure out what the signs were referring to, so I looked it up, and it turns out that in the 1930s, the introduction of traffic lights displaced many policeman whose job it was to manually direct traffic at busy intersections (as they still do in Bermuda); the lights were often referred to as "robot policemen" and somehow, the name stuck.

Then, while driving to Jo'burg today, I noticed an official sign declaring "Flying Saucer" ahead; turns out that is a name accorded to a giant cloverleaf interchange between two major roads.  I don't think it's a generic term for a big interchange, but it seemed to fit the robot theme.

I drove into the neighboring North West province yesterday on some smaller, calmer roads, and spent the afternoon at the Ann van Dyk Cheetah Centre, dedicated to the preservation of this amazing African cat.  The center has been around for 41 years, and has been identified as one of the primary reasons the cheetah is no longer "endangered", but is still considered "vulnerable".  There are about 12,500 cheetahs remaining in Africa, with over 800 of them having been born at the Cheetah Centre.

Click on Byron, below, to see some pictures from the Cheetah Centre 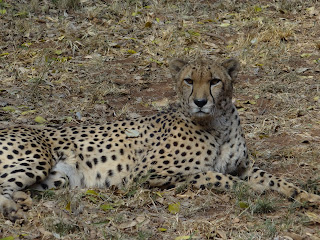