Last Wednesday was Nelson Mandela's 94th birthday (as well as my Mom's not-94th birthday), and it was a well-covered event here in South Africa.  As you may recall, Nelson Mandela (known here by an affectionate nickname, Madiba) served a 27-year prison sentence on charges of sabotage, and after he was freed in 1990, he was instrumental in helping South Africa begin the transition to democracy, eventually serving as South Africa's first post-apartheid president from 1994 to 1999.

While his birthday is not yet a holiday, it is similar to Martin Luther King day in the US, as people are encouraged to give back to their country by volunteering for 67 minutes, one for each year that Madiba worked toward social justice in South Africa.  In addition, it was estimated that nearly 12 millions children across the country sang Happy Birthday to him at the beginning of the school day. 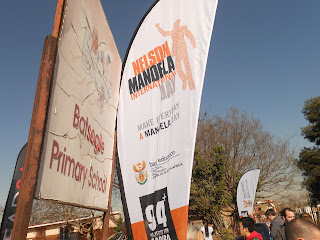 The US Government organized some volunteer activities, and I and some of my new colleagues traveled to Soweto, where we helped to paint a fence, clean up the school grounds and organize the school library.  There were lots of volunteers from around the area and plenty of media to report on the events of the day.  The well-dressed Primary school kids seemed to enjoy all the attention, especially getting the chance to hug a very tall Ronald McDonald, who greatly confused me with his pronounced non-American accent.

Mandela is now retired, and doesn't appear often in public, but his opinion still seems to influence the direction of South Africa; he remains friends with former President Clinton, who has visited him on many of his recent birthdays, and was here last week to see him. 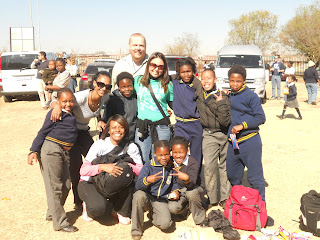 My first weekend in the country, I went to the Apartheid Museum in Johannesburg, where the history of the rise, implementation and dismantling of apartheid is very well documented, and there was a special exhibit on the life of Nelson Mandela, including a replica of the tiny cell he spent many years in, and covered a lot of Mandela's early years.  Unfortunately, the exhibit was a bit disorganized, but it was a very thorough exhibit of the life of a man that is revered by many the world over for his unwavering dedication to peaceful work for social equality.